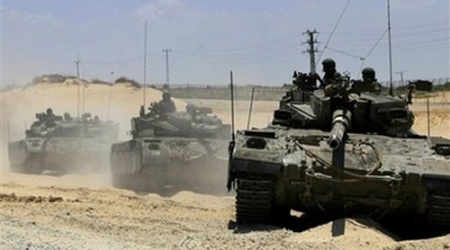 Dozens of Israeli military vehicles and bulldozers carried out, Tuesday morning, an incursion east of Khuza’a village, in the southern Gaza Strip.According to Al Ray, six bulldozers entered into the area, carrying out leveling operations east of al-Rowaida gate, amid shot firing.

No injuries or damage were reported.
However, three Palestinian fishermen were kidnapped by the Israeli navy, off the shore, according to local sources.

They said Israeli navy nabbed the three fishermen while fishing in the Gaza waters, confiscated their boat and took them into custody.
Similar incursions take place almost daily in the eastern and northern borders of the Gaza Strip, in clear violation of the cease-fire-agreement which Israel signed with the Palestinian resistance, brokered by Egypt, in November of 2013.

The Israeli regime has controlled Gaza waters since its occupation of the area in 1967, and has kept several warships stationed off the coast since 2008.