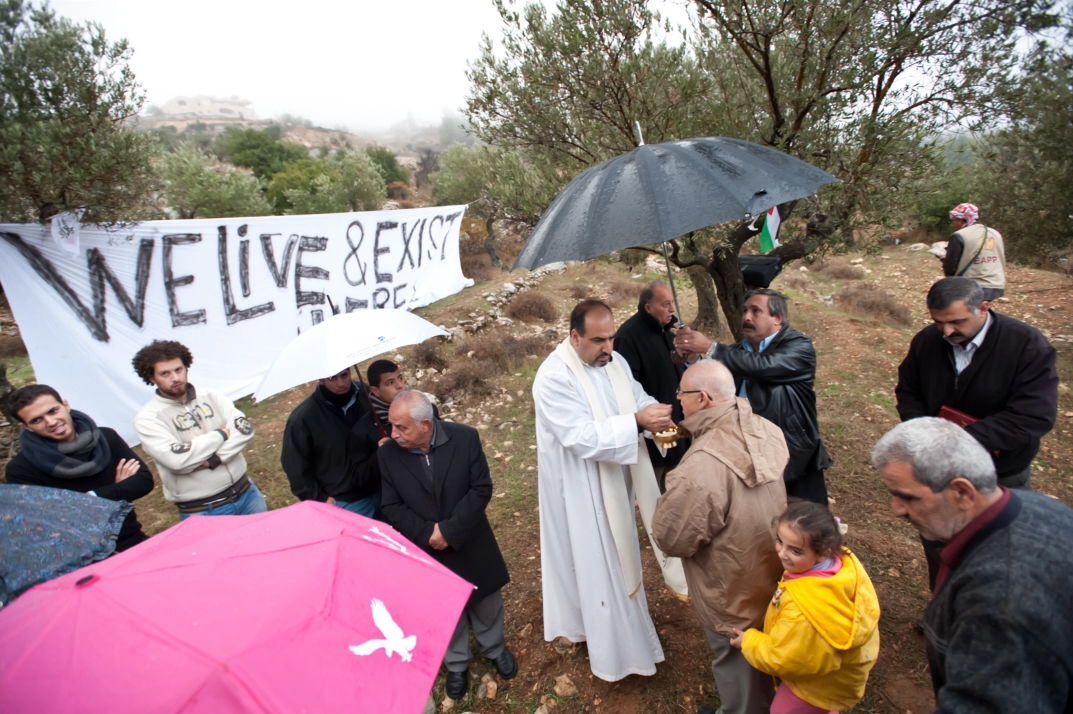 Every Friday, for more than two years, come sunshine, rain, or even snow, Father Ibrahim Shomali, a Palestinian Catholic priest, has led a mass as a form of nonviolent resistance against the Israeli separation barrier which threatens to divide the Cremisan monastery and a valley of olive groves from the rest of the West Bank town of Beit Jala.
Organized by Palestinian Christians, this unique witness has welcomed activists and community leaders of all faiths, international church leaders, diplomats and journalists. A legal appeal, by local landowners, against the wall’s route went to the Israeli Supreme Court in January, ordering Israel’s State Attorney to provide more evidence as to why dividing Cremisan is necessary.

These vigils will continue until the final hearing on the case, in July. But, regardless of any Israeli court decision, the International Court of Justice ruled, in 2004, that the construction of the wall in occupied Palestinian territory is contrary to international law. In Beit Jala, as with 85% of its route, the barrier would take more Palestinian land instead of separating the West Bank from Israel on the internationally recognized border, or Green Line.

Israel claims that the barrier is needed for security, and many believe that the wall stopped suicide bombings, the last of which occurred in February of 2008. At that time, according to the Israeli human rights group B’Tselem, these and other acts of armed resistance by Palestinians had killed 1,012 Israelis since October 2000. During the same period, Israeli forces killed 4,536 Palestinians.

But, as the Cremisan case illustrates, only two-thirds of the wall’s planned route has been built. Every day, tens of thousands of Palestinian workers lacking hard-to-get Israeli permits pass through the barrier’s remaining gaps, in order to avoid checkpoints. Suicide bombers could enter just as easily, indicating that, as former Israeli Defense Minister Moshe Arens told an Israeli newspaper, “It’s clear there is no connection between the wall and the cessation of attacks.”

In Beit Jala, says Father Shomali, “The wall is being used to link the settlements of Gilo and Har Gilo, consolidating the Israeli annexation of our land.” Covering the hilltops on either side of the monastery, they too are illegal [under] international law, as are all settlements in the occupied Palestinian territories. These two settlements already occupy 778 acres of Beit Jala land, according to the Applied Research Institute Jerusalem (ARIJ). Were the barrier built as planned, this majority Christian town would lose a total of 1,649 acres, isolating 47% of its land behind the wall.

In other villages in the West Bank, such as Budrus, Jayyous and Bil’in, Palestinian activism and legal action have succeeded in altering the barrier’s route. As the weekly vigils continue, Beit Jala’s residents pray that their protest will be similarly successful.

In this video slideshow, Father Shomali explains the motivation behind this unique protest, and the recent developments in his community’s legal challenge to the separation barrier.