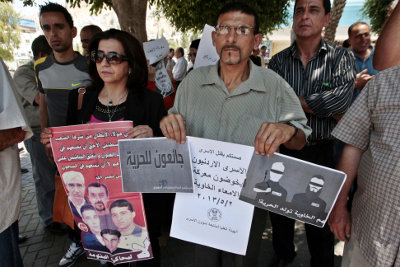 As negotiations between Israeli and Palestinian officials reach a standstill, Palestinian negotiators have voiced their objection to the Israeli decision not to release the last of four groups of Palestinian long-term prisoners whose release had been promised as part of the so-called ‘peace negotiations’.The release had been scheduled to take place on Sunday, March 30th, consisting of 26 long-term prisoners who were part of a list of 104 approved for release, by Israeli officials, as part of the peace talks with Palestinians.

Thus far, 78 of the men approved for release have been sent home, as part of a deal between Israeli and Palestinian officials. In exchange, the Palestinian leadership agreed not to pursue a bid for Palestinian statehood at the United Nations separate from the negotiations.

The current round of so-called ‘peace talks’ is being led by current U.S. Secretary of State John Kerry. One of the conditions set by Israeli officials was that their demands must be agreed to by the Palestinian negotiating team for the release of this group of prisoners to take place.

The Palestinian news agency Ma’an reported that Fatah official Hazem Abu Shanab told their reporters, ‘The release of prisoners is a legitimate, lawful, and human right. Their freedom should not be linked to concessions regarding extending or continuing the diplomatic process”.

Recent statements by right-wing Israeli legislators, including cabinet members, indicated that they would break up the coalition government in Israel formed by current Prime Minister Binyamin Netanyahu, should he decide to go ahead with the release of the 26 prisoners.

But the Palestinian negotiators consider this refusal to release the prisoners to be a violation of the agreed-to terms of moving forward with the peace agreement.