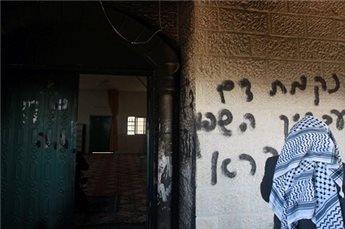 The Roman Catholic church has demanded Israeli action, after suspected Jewish vandals daubed hate graffiti on Vatican-owned offices in annexed East Jerusalem, just two weeks before a formal papal visit.Israeli Internal Security Minister Yitzhak Aharonovitch said, according to Ma’an, that the Israeli government plans to use administrative detention against the suspects, as it comes under mounting pressure over its failure to secure a single prosecution in an escalating wave of hate crime.

Hebrew-language graffiti reading ‘Death to Arabs and Christians and those who hate Israel’ was daubed over offices of the Assembly of Bishops at the Notre Dame center, on Monday, according to the church.

‘The Notre Dame center is the property of the Holy See and this provocation comes two weeks before Pope Francis’ visit to the Holy Land and Jerusalem,’ the Latin patriarchate stated via its website.

‘Heads of the Churches in the Holy Land are preparing a series of actions aimed at informing local and international public opinion, and to make the authorities and law officials aware of their responsibilities.’

Maronite Patriarch Mar Beshara al-Raʻi said, Tuesday, that his upcoming visit to the Holy Land is intended to support the Palestinian cause, according to a PNN report.

“I intend to visit the Holy Land not in recognition of the Israeli occupation but to declare that this is our land. I am going there to emphasize that this land does not belong to the Jews. I intend to tell the Palestinians that we stand by them and support them,” al-Raʻi was quoted Tuesday by the Lebanese Al-Nahar daily.

The US State Department’s 2013 Country Reports on Terrorism included ‘price tag’ attacks for the first time ever, citing UN figures of some ‘399 attacks by extremist Israeli settlers that resulted in Palestinian injuries or property damage.’

In related security concerns, a recent Newsweek article has revealed that Israel spies on the United States more than any of their ‘allies’, and that these activities have reached an alarming level, with the main targets being US industrial and technical secrets — this all in quotation of classified briefings on legislation which would make it easier for Israeli citizens to get visas to enter America.

Special note was given, according to Ma’an, to the fact that a US congressional staff member, familiar with a briefing from last January, called the testimony ‘very sobering … alarming … even terrifying,’ and quoted another as saying the behavior was ‘damaging.’

‘No other country close to the United States continues to cross the line on espionage like the Israelis do.’

According to the article, the briefing was one of several in recent months given by the Department of Homeland Security, the State Department, the FBI and the National Counterintelligence Directorate.