Hunger Strikers: ‘Either I go home – or I go in a plastic bag’ 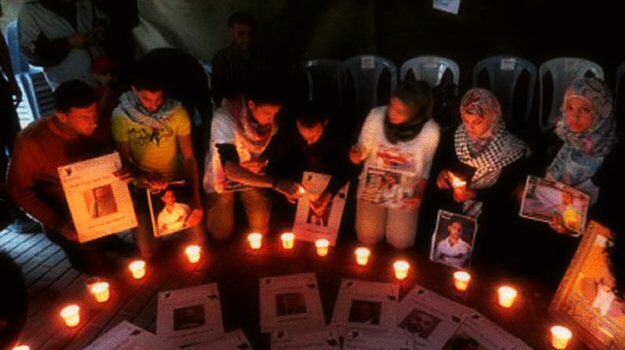 On April 24th of this year, over 100 Palestinian political detainees went on an open-end hunger strike in demand to an end of administrative detention, in which Palestinian prisoners are held under harsh conditions without charge or trial, and under ‘secret evidence’ that is never revealed to the prisoner nor their lawyer, and may or may not even exist. More prisoners have joined the strike in the four weeks that have ensued, bringing the total number to over 140; and even more are expected to follow.’What do you want from me?’ a 70-year-old lawyer and professor of economics asked the Israeli military when they arrested him last year, according to the International Women’s Peace Movement. ‘You are very dangerous,’ was the reply. Recalling, the man laughed: ‘I am dangerous to one of the most powerful armies in the world?! I am a danger to the only nuclear power in the Middle East?! I only have my pen, my notebook, and my mind.’

The Palestinian Ministry of Prisoners’ Affairs announced this past week, according to the Alternative Information Center (AIC), that 5,200 Palestinian prisoners in Israeli jails would stage a one day hunger strike in solidarity with Palestinian administrative detainees:

120 prisoners in Hadarim prison went on a single day solidarity strike, that Wednesday. The strike was joined by imprisoned Palestinian leaders Marwan Barghouthi and Ahmad Saadat, along with 40 detainees held in the Negev, AIC reports.

Additionally, the Ministry says, all prisoners are to initiate an open-ended hunger strike next week, noting that ‘the health status of the prisoners has remarkably exacerbated. 20 have been transferred to Israeli hospitals after having swooned while the majority have been dragged to solitary confinement. These, along with Israeli indifference toward the strikers’ demands, require an urgent action to save our prisoners.’

Even IPS medical staff are collaborating with these increasingly repressive actions against the hunger strikers, according to the Women’s Movement.

The Israeli Knesset (parliament) is currently debating a bill that would legalize force-feeding, they say, a practice the World Medical Association considers ‘never ethically acceptable’. Force-feeding in Israeli dungeons already has a tragic precedent: in the early 1980s, after a lengthy hunger strike in Nafha prison, Ali Ja’fari and Rasem Halawi died after doctors inserted the tubes in the wrong place.

Hunger strikes have played an important role in the struggle of Palestinians held prisoner by Israel, says the International Women’s Movement.

“Every achievement in prisons for simple, daily things such as sanitation, bed, or radio have been reached through hunger strikes,” says Saed Abu-Hijleh, an activist, poet, and lecturer at An-Najah National University in Nablus.

During the Oslo Accords of the 1990s, Abu-Hijleh states, Palestinian people were expecting all political prisoners to be released from Israeli jails, since a ‘peace treaty’ was being signed between Israel and the PLO (Palestine Liberation Organization).

However, the Movement further reports, such hopes never materialized and Palestinian prisoners became a bargaining chip in political negotiations – the so-called “peace process” – ever since.

‘Prisoners on hunger strike cannot go back now,” Abu-Hijleh says. ‘It’s ‘Either I go home, or I go in a plastic bag’.’

Original article, in its entirety, at the International Solidarity Movement via link below.