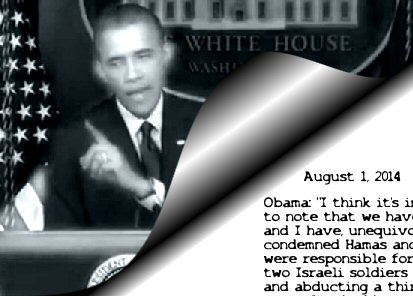 US President Barrack Obama approached the press podium, Friday, shuffling the Western-backed civilian assault currently raging in the Gaza Strip into a deck of seemingly random issues, ranging from the crisis in Russia/Ukraine to US economy and 9/11 torture admissions.As he made his way around to addressing the topic of Gaza, the politician appeared to be directly quoting the Israeli narrative that Hamas violated the recently failed 72-hour ceasefire agreement and, predictably, demanded the return of an Israeli soldier who was captured by Palestinian resistance fighters.

‘I think it’s important to note that we have, and I have, unequivocally condemned Hamas and the Palestinian factions that were responsible for killing two Israeli soldiers and abducting a third almost minutes after a cease-fire had been announced,’ the US president drummed, to the tempo of a similar denunciatory statement issued by UN officials.

The ceasefire, jointly brokered by both United States and United Nations representatives, dissolved into a morbid state of continued chaos within 2 hours of its initiation, with reports surfacing directly from the region that Israeli forces had invaded Rafah, earlier on Friday morning — more than 2,400 meters — and exchanged continuous fire with Palestinian resistance throughout the day.

Army sharpshooters deployed on rooftops of homes in the area were reported to have opened fire at Palestinians trying to reach their homes in Rafah, that morning, in addition to several other areas of the Strip, as medics and rescue teams searched massive heaps of smoking rubble for the distorted and macabre remains of the week’s previous victims.

A massive bomb hit Rafah that morning, in which over 62 people were killed and 200 injured as Israel attacked a crowded local marketplace, completely shattering the ceasefire less than 4 hours after it had begun.

As hope for at least a temporary peace in the region continued to unravel throughout the day, Barrack Obama again appealed to the ‘resilience of Americans’ as he responded to a well choreographed line of questioning about various affairs, in the context of national solidarity and communal responsibility, in a leadup to what was, at best, an obvious reiteration the official Israeli stance on the most pressing issue:

‘I want to make sure that they are listening. If they are serious about trying to resolve this situation, that solider needs to be unconditionally released as soon as possible.’

He described the situation as ‘heartbreaking’, saying that he wanted to see ‘everything possible done’ to ensure that Palestinian civilians aren’t being killed in the conflict.

At least 1,600 people have died so far, since July 7th, hundreds of whom have yet to be named, making up an 85% civilian death toll to include numerous Palestinian women, children, infants, elderly and disabled — as well as 9 journalists. And, as hospitals and ambulances continue to be bombed and fired upon by Israeli soldiers, medics have been forced to treat their severely wounded patients in the increasingly over-crowded halls that traverse what still remains of Gaza’s medical facilities.

At 16:30, Gaza’s largest hospital received a call from an unlisted number, stating that a building there needed to be evacuated immediately, as the Israeli military intended to bomb it.

According to the Ministry of Health in Gaza, as of July 29th, there have been 34 attacks against Gazan medical facilities since the beginning of Israel’s self-proclaimed ‘Operation Protective Edge’.

An Israeli army spokesperson, when confronted by Mondoweiss as to why they could not, in effect, quote a comprehensive timeline of events leading up to the total collapse of the temporary ceasefire, the spokesperson, as if by reflex, retorted: “There were terrorists and they attacked the soldiers, two soldiers didn’t just drop dead.”

The Israeli military cites current confirmed casualties at just over 50, in addition to 3 Israeli civilian deaths.