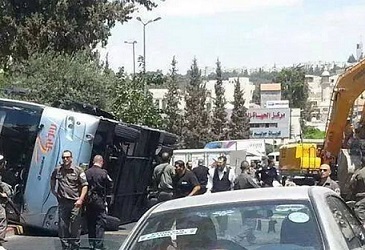 The family of Mohammad Nayef Ja’abeess, 21, who was shot and killed by the Israeli police in occupied Jerusalem, Monday, denied Israeli allegations that he deliberately rammed his industrial digger into a bus.His uncle, Abu Amjad, said Mohammad left home, as he does every day, driving his industrial digger, and that his route includes driving on the Samuel Hanevi Street, between West and East Jerusalem.

An Israeli man, who apparently thought, or assumed, Mohammad is attempting to carry out an attack, opened fire at the digger from a distance.

Nayef then tried to reverse his digger and back away, but more shots were fired, and his digger rammed an Israeli bus, before more live rounds were fired at him.

Abu Amjad added that eyewitness accounts, and cellphone recorded footage, negate the Israeli claims and confirm the claims of the family.

As for the call Mohammad allegedly made to the family before the attack, the uncle said rumors and allegations are inaccurate, only meant to claim the young man carried out an intentional attack.

“The Police can claim whatever they want, they always justify their attacks against the Palestinians, they justify crimes”, he added, “This is not a new policy; Mohammad was simply murdered in cold blood”.

The police maintains that Mohammad deliberately attacked the bus, wounding the driver and four Israelis, and killing another.

A medic, who arrived at the scene following the fatal shooting, said Mohammad was shot by various rounds of live ammunition to several parts of his body.

Following the incident, dozens of police and security officers invaded Jabal al-Mokabber, the hometown of the slain Palestinian, and clashed with dozens of local youth.

The soldiers fired gas bombs, and dozens of rounds of live ammunition.

Scores have been treated for the effects of tear gas inhalation, and the army kidnapped Mohammad’s father, Mousa Ja’abeess.