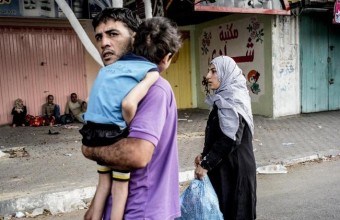 “Over 485,000 people have been displaced (almost one third of the Gaza population) –1,700,000 people (the entire population of the Gaza Strip) have been affected by the destruction of electricity, water and waste water infrastructures,” the Palestine Liberation Organization’s ‘Gaza Under Fire Report’ stated Monday.(PNN/WAFA) “A temporary ceasefire of 72 hours has been reached. Minutes before the ceasefire went into effect on Monday midnight, Israeli occupation forces targeted Khan Younes killing at least 2 Palestinians and injuring several others. While the Israeli military troops are withdrawing from Gaza, Israel continues to maintain its occupation by controlling maritime borders, sea space and also Gaza’s connection with the rest of Occupied Palestine,” the report further stated.

“Over 485,000 people began to return to their areas of residence, in many cases to find their homes completely destroyed or simply not fit for living. There is no safe place for civilians in Gaza. Public and private sectors, including schools (governmental, UNRWA and private), places of worship, hospitals, ministries, heritage sites, factories, agricultural areas, fisheries and farms among others were all targeted and extensively damaged. Many of those who returned to their homes are fleeing once again due to the resumption of the attacks.”

Note: As of January 2014, there were approximately 5.4 million Palestinians registered as refugees in various parts of the world. Palestinians now make up the largest refugee group in the entire world.

According to the Palestinian News Network (PNN), the PLO’s Negotiations Affairs Department underscored that “Israeli disregard to the lives of Palestinians have resulted in the killing of hundreds. Instead of learning from previous experiences, some countries gave green light to Israeli forces to bombard and invade the Gaza Strip,” further stating:

“The international community must hold Israel responsible for its crimes.”

For statistics regarding the latest casualties and destruction by Israel in Gaza, as detailed in the report, please refer to the original PNN article.