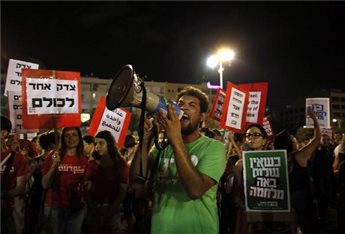 Thousands of Palestinian supporters from Israel gathered in Yitzhak Rabin Square, in Tel Aviv, Saturday, to demonstrate in protest of the government’s military offensive on the Gaza Strip.The protest, organized by the Meretz party, Hadash and activists from Peace Now, was the largest held in Israel since it first launched its massive civilian assault in Gaza, on July 8th, according to Ma’an News Agency.

Party chief Zehava Galon called on the Israeli PM to resign. ‘He has failed, both for security and for peace — he must go,’ he said.

Netanyahu has refused any discussion with the unity government, which he accuses of having links with the Hamas faction, whom Israel continues to insist is a terrorist organization, rather than a legitimate and democratically elected political party standing in opposition to the illegal Israeli occupation.

Ma’an further reports that police were deployed in force, in the area, to prevent trouble with counter-demonstrators from the opposition.

On Thursday, the square hosted a demonstration of around 10,000 Israelis in fierce support of the military operation which has, to date, invoked the violent deaths of nearly 2,000 Palestinians …and 64 Israelis.