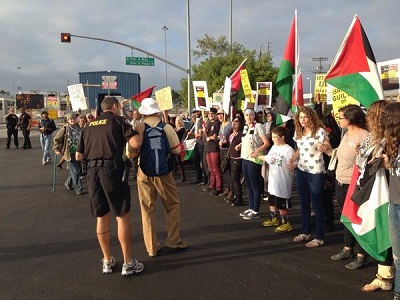 Following a four-day long port blockade action in Oakland, California, in which activists delayed and blocked an Israeli ship from unloading its goods, Palestine supporters in Tacoma, Washington and Los Angeles, California have continued the action on Friday and Saturday by blocking two ships from the Israeli Zim line.The activists are following a call from hundreds of Palestinian civil society groups to boycott Israeli goods, as part of a campaign of Boycott, Divestment and Sanctions aimed at pressuring Israel through economic means to comply with its obligations under international law, and end its attacks and discrimination against the Palestinian people.

Protesters coordinated their actions with the start and stop times of the shifts of dockworkers, most of whom are unionized with the ILWU (International Longshore and Warehouse workers Union). They hoped that, by forming a picket line in front of the port entrances, they would be able to create a situation in which the unionized workers would be able to say that crossing the picket could endanger their safety. If that condition exists, the union workers are permitted to go home without carrying out the work of unloading the ship.

This happened on a number of the shifts during the four-day long blockade in Oakland and, apparently, occurred for several of the shifts at the port of Los Angeles and the Port of Tacoma as well. The ships only have a few days in which they can remain in port in order to keep their schedule, so, there is a good possibility that, because of the delays and ‘health and safety’ issues, many of the goods on the ships were not unloaded at all.

Among those participating in the port blockade in Tacoma, Washington are the parents of the late Rachel Corrie, who was killed by an Israeli bulldozer in 2003, at the age of 23, while standing in front of a Palestinian doctor’s home to try to stop the Israeli military from demolishing it.

Zim Integrated Shipping Services is an Israeli firm specializing in shipping Israeli products to ports around the world. It is the largest Israeli international shipping company. The company was founded in 1945 by the Jewish Agency and the Histadrut (General Federation of Laborers in the Land of Israel). When Israel was created in 1948, the government of Israel held a controlling share in the firm until 2008, when the controlling share was sold to the Israel Corporation.

The Israel Corporation was originally founded by the government of Israel, and was exempted from taxes for decades – it is now controlled by the Ofer Brothers.

One of the Oakland action organizers, Reem Assil, said, “It’s not just about the military offensive in Gaza. That sparked an international outrage, but we know this is nothing new. The ceasefire is still up in the air, and we want to make sure to use this point in our history to make sure this never happens again. Part of doing that is to isolate Israel.”

She said that activists in Oakland worked closely with union members to try to build support for their action, adding, “This is the kick-off of what we hope to be many. We hope this is the beginning of a continued coordinated strategy of working with local rank and file and educating union members.”

Following the successful actions in Oakland, Tacoma and Los Angeles, Palestine supporters in other cities say they are preparing for potential blockades of Israeli ships from the Zim line in Seattle, Washington, Dublin, Ireland (August 29th), and Valencia, Spain (August 24th).