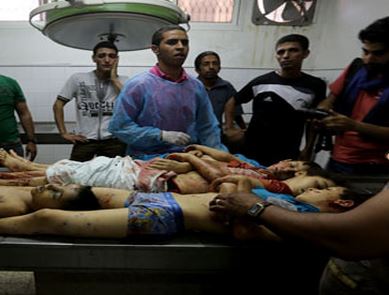 Palestinian medical sources reported, Monday, that two Palestinians were killed and dozens injured, in a series of Israeli air strikes and bombardment targeting different areas of the Gaza Strip.The sources said that one woman was killed and at least sixteen were injured, one seriously, after the Israeli army fired missiles into a mosque and several homes.

The slain woman has been identified as Farhana Ibrahim al-‘Attar, 48 years of age. She was killed after the army fired missiles into the al-‘Atatra area, west of Beit Lahia, in the northern part of the Gaza Strip.

She went back home, which she had evacuated earlier in order to take clothes, and was killed in her property.

Another Palestinian died of wounds suffered earlier Sunday, and at least fourteen Palestinians were injured, when the army bombarded homes in Gaza City.

Medical sources said the slain Palestinian has been identified as Yassin Ibrahim al-Biltaji, 23.

Ten Palestinians have also been injured when the army bombarded homes, and a mosque, in the al-Fallujah area, in Central Gaza. The wounded have been moved to the Kamal ‘Aswan Hospital.

Medical sources in Rafah, in the southern part of the Gaza Strip, said four Palestinians were injured, one seriously, in a number of Israeli strikes.