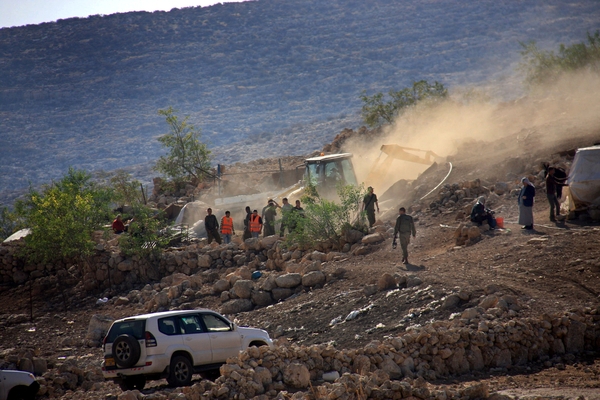 Belgium issued a strong condemnation of the Israeli destruction of a major power grid in the occupied West Bank which was funded by the country, and serving Khirbet at-Tawil village, near the northern West Bank city of Nablus, and demanded Israel pay compensation.Last Monday, Israel demolished and removed 70 electricity poles and around 4.5 Kilometers of cables providing electricity to the village.

The cost of the destroyed power grid and network is estimated at 55.000 Euros.

On Thursday, Belgian Foreign Minister Didier
Reynders summoned the Israeli Ambassador to condemn the recent Israeli assault, and asked Israel to pay compensation for this destruction.

Reynders said that the Israeli violations do not only target Belgian projects in the occupied territories, but also target many projects funded by other countries.

Oxfam aid organization said the power network was built in 2007, with Belgian money, and was meant to provide electricity for Palestinian shepherds in the area.

The Israeli army destroyed the network on Monday, removing 70 electricity poles and 4.5 kilometers of cables.

Reynders said that Israel first issued the destruction order in 2008 and, then again, in March of this year, but Israel went ahead and destroyed the grid last Monday, adding that Belgium conducted utmost diplomatic efforts to stop the destruction.

The Belgian official told Flanders TV that he asked the Israeli ambassador to come to the ministry to denounce the violations, and to ask Tel Aviv for compensation.

He said that the EU needs to come up with an initiative that stops such attacks, as they do not only target Belgian projects, but also projects funded by other countries.

He added that destroying this humanitarian project poses more suffering on the residents, and further complicates their lives and basic needs, including access to water.

Palestinian experts attempted to repair the destroyed network and restore power to the area, but Israeli soldiers forced them to stop, and removed them.

The Palestinians living in the area are shepherds, producing dairy products and need electricity for their daily livelihood, and for storing their products, including cheese, milk and yogurt.

Oxfam is asking the Belgian government to seek compensation amounting to 55.000 Euros needed for repairing and restoring the destroyed grid.

Around 250 Palestinians live in Khirbit at-Tawil village, located in Area C of the occupied West Bank, under full Israeli military and civil control.