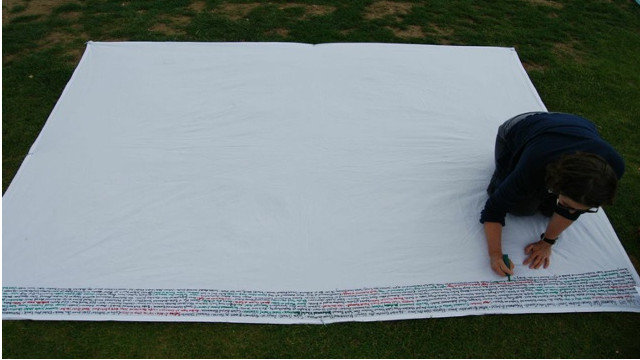 Last August, the UK based Israeli artist Idit Elia Nathan inscribed 1484 of the names of Palestinians killed in the Gaza attack at that time onto a white sheet. The project called “Don’t look away now“, aimed to comment on the deaths of every single person killed.

Nathan later published her own reflections and feelings while inscribing the names of the dead. “The hardest lines to inscribe are the families, some stretching over more than one line“, she wrote in her blog.

Other reflections ranged from the difficulties of accurately naming the dead, her own Zionist education and the behaviour of Israeli society in face of the war crimes committed in Gaza: “The country I grew up in and which claims to be democratic has banned a human rights organisation’s video clip reading out these names so that the Israeli public would be able to carry on looking away from the horrors committed in their name.“

In an Interview with the AIC, she speaks about the project, Israeli society in light of the recent Gaza attack and her research on the relationship between play and conflict:

In your project “Don’t look away now“ you wrote the first 200 names in public and afterwards described your own thoughts extensively. What were the reactions of other people around you?

The project was devised and realized for a Saturday vigil of the Cambridge Palestine Forum, an umbrella group of various Palestine solidarity societies in the city, while the massacre in Gaza was still ongoing. Many people helped me set up and start off that day. A group of activists took charge of the list of names to annotate the children and the women. Many of those who took part in the vigil as well as passers by engaged in reflection, I think. Conversation was quite minimal in fact, mainly I suppose because it was very overwhelming and the sight of the white sheet on the ground filling up very slowly with names was striking.

The title of your project is “Don’t look away now“. Is that title directed towards Israeli society with its denial of the war crimes and human rights violations committed during the attack on Gaza or more towards the international public and media that seems to forget quickly about what happened in Gaza since the ceasefire and returns to other news and ‘business as usual‘?

Absolutely. I, like many other activists, knew that Gaza would be forgotten very quickly, so the idea behind Don’t Look Away Now was to get people to realize that we are all responsible for allowing massacres to take place. Don’t Look Away Now was directed primarily at Cambridge residents and the UK. I cannot claim to reach the Israeli public, though social media does help make things that happen here also visible over there. The response online was quite interesting and totally supportive. The groups of activists that I donated the banner to a week later (during the Saturday vigil outside the tow hall this time) are always trying to get the public to engage with the issue and importantly with the complicity we all partake in. It is very hard to get people to understand things as media is so biased and the pro-Israeli lobbying so pervasive.

In writing about the project you reflect about your own education and having emerged from a society that consequently denies its own violent history on account of the crimes suffered by the international Jewish community. What was your way out of this mindset?

I am of a generation which remembers the border with Jordan cutting across Jerusalem, and grew up knowing that the 1967 occupation will be detrimental to Israel. Being brought up in a liberal, albeit essentially Zionist, environment, we were not taught about the Nakba, but as admittedly I had a rather privileged education, we were brought up to question things. Once you start asking questions and you see that the answers are not forthcoming and that there is lack of knowledge or will to engage with the very difficult issues, you become even more determined to find out for yourself. I do remember that many of us were very critical of the way Holocaust education was taught; in fact, the Holocaust itself was hijacked by Zionist rhetoric and practices. We were angry at the blindness to others’ suffering and dispossession, specifically because we were told that the main lesson of World War II and the Holocaust was that nothing like this should ever happen again.

Still, polls taken in Israeli society in July show an overall approval of 95% of the attack on Gaza, while only about 4% believed the Israeli army had used excessive firepower in Operation Protective Edge. What could explain this strong consent and how do you feel about this?