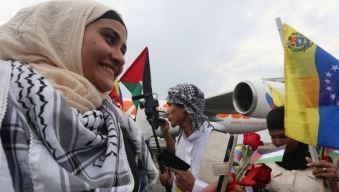 119 Palestinian medical students arrived for studies in the Venezuelan capital Caracas. The Venezuelan ‘Yasser Arafat Scholarship Program’ has been extended to over 1,000 Palestinian students in various disciplines.

“We’ll train at least 1,000 Palestinian students. … I just ordered the Ministry of Education to expand the program beyond medicine, so we also will enable studies in engineering, architecture, and every field of knowledge”.

The program is of great importance for Palestine, which has an above average need for medical doctors due to repeated Israeli – Palestinian conflicts.

The Venezuelan scholarship program has been dubbed after the late PLO leader and first Palestinian President Yasser Arafat.

The Venezuelan scholarship program has been dubbed after the late PLO leader and first Palestinian President Yasser Arafat.

Palestine also has a great need for architects and engineers, not only due to the devastating consequences of Israeli bombing raids, such s during the 2014 war on the Gaza Strip.

Palestine will need expertise in architecture and engineering, and many other specialties for the building of a new infrastructure for a viable Palestinian state once international pressure and the increased number of nations who recognize Palestine enables the Palestinian government to engage in much needed, long-term infrastructure projects.

Telesur reports that President Nicolas Maduro told the first 119 Palestinian medical students that he was so emotionally affected when he saw the plane with the arriving students touch down in Caracas and when he saw the students dancing from joy, that he could not other than cry from the emotions he felt. Maduro said:

“Today Palestine has entered into the heart of Venezuela. … We want to see you dance again”.

The Venezuelan scholarship program has been dubbed after the late PLO leader and first Palestinian Authority President Yasser Arafat.