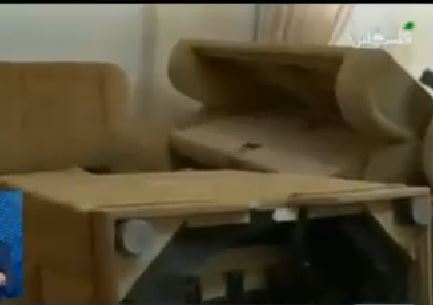 Medical sources have reported, Tuesday, that a Palestinian teen was shot, and moderately injured by a live round, fired by an Israeli settler near Beiteen village, east of the central West Bank city of Ramallah. Settlers attack homes in Burin and Huwwara, near Nablus.Medical sources in Ramallah said Ibrahim Daraghma, 19 years of age, suffered a gunshot injury to his jaw, and was moved to the Palestine Medical Center, in Ramallah.

He was shot after a number of settlers opened fire at Palestinians close to settlement bypass road #60, near the village, before dozens of soldiers invaded the area, leading to clashes with local youths.

In related news, a number of armed Israeli settlers attacked several homes at the main entrances of Burin village, and Huwwara town, south of the northern West Bank city of Nablus.

Local sources said the settlers invaded at least three homes, and managed to destroy the furniture of one of them, before a number of youths of the unarmed Popular Guards Committee forced them out of the village.

The home that sustained the most damage belongs to resident Ghaleb Najjar, while the homes of Atallah Abu Sufian and Marwan Najjar, sustained lesser property damage.

Spokesperson of the Fateh Movement in Huwwara village Awad Najm stated the settlers attacked the home of Salah Shawkat, close to the Huwwara Israeli military roadblock.

Najm added that Israeli soldiers also invaded the village, and violently closed its shops and stores.

A number of settlers also hurled stones at Palestinian cars, near the Yitzhar illegal settlement, built on Palestinian lands, south of Nablus, causing property damage but no injuries.

Settlers also closed the Huwwara roadblock from both directions, and prevented the Palestinians from crossing while the soldiers did not attempt to remove the settlers.

Earlier on Tuesday, several extremist settlers surrounded an elementary school in ‘Orif village near Nablus, and tried to invade it before throwing stones and bottles into the school, an issue that led to clashes between the residents and the invading settlers.

Soldiers arrived at the scene and clashed with the residents before firing gas bombs into the school, causing dozens of injuries among the students, teachers and medics who rushed to the scene.