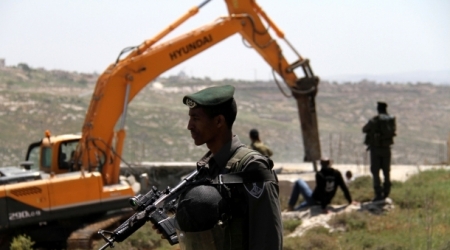 Israeli bulldozers demolished, on Thursday, a number of mobile homes to the east of At-Tayba village, east of Ramallah. Near Hebron, forces seized a tractor and four water tanks, while residents of ‘Ein ad-Duyuk at-Tahta, to the northwest of Jericho, were served with over 70 notices to halt construction.Israeli forces accompanied by military bulldozers arrived to an area east of At-Tayba village, where they proceeded to demolish mobile homes belonging to one Yousef Ka‘abna, seizing the contents of the homes.

WAFA notes that forces had previously demolished their house in late August.

Also on Thursday, Israeli forces seized an agricultural tractor and four water tanks from an area to the east of Yatta, in the south of Hebron.

Forces and ‘zoning’ officers reportedly broke into Susiya, in Massafer Yatta, where they seized a water-loaded tractor belonging to Muhammad al-Nawaj‘a, according to Rateb Jabour, Coordinator of the Popular Committee against Wall and Settlements.

Forces raided ‘Ein ad-Duyuk at-Tahta, where they served residents with some 72 notices to stop construction on their structures and to remove several tents, under the pretext that they are located in disputed land which is part of the Jerusalem district, said Head of al-Maleh Village Council ‘Aref Daraghma.

Mr. Daraghma added that over 40 families will be displaced as a result.