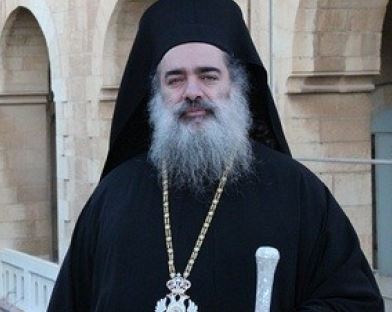 Patriarch of the Greek Orthodox Church in Palestine, Archbishop of Sebastia (Theodosius) Attallah Hanna, called on the world community to fully recognize all legitimate Palestinian rights of liberation and independence.Archbishop Hanna said what is happening in Jerusalem, the deadly escalation in the city, stems from Israel’s ongoing injustice, and violations, against the Palestinian people, their property and their holy site.

Talking to the Greek Orthodox Radio in Athens, on Saturday morning, Hanna said the Palestinian people are intellectuals, a civilized nation that wants to live in peace, and to end the injustice inflicted on them by the occupation, Israel’s illegal policies, and constant violations.

He said that people and counties around the world, and every person who defends human rights and works for justice, must deliver the message of the Palestinians, facing ongoing injustice, and must help the Palestinians end this illegal occupation and oppression.

“As a Greek orthodox priest, I must call for justice; I must side with the persecuted people,” Hanna said, “We should defend the Palestinian cause, we should work for peace, justice and liberty.”

He added that he rejects all sorts of extremism, violence and hatred, affirmed that ending the occupation, and regaining the stolen rights, “will bring justice and peace to the holy land.”

“We as Palestinian Christians are living in our homeland; we are part of the Palestinian nation,” Hanna said, “We will never abandon our rights, and the right to defend our cause along with every Palestinian.”

He said that all European countries, every country around the world, must have the courage to recognize all legitimate Palestinian rights, so that the Palestinian can live in peace and liberty in their homeland.

Hanna further called on all Orthodox Churches, Catholic Churches, and every church around the world to defend the Palestinian rights, and to help them gain their freedom.

“Christians in Jerusalem suffer the same way Muslims do,” he stated, “We are one nation, enduring the same suffering, and fate.”

He also called for ending the destruction of Syria, the aggression that is targeting the country and its people, and called for more extensive efforts to release every kidnapped person, including the two abducted priests.

In addition, Hanna said Iraq, a country with deep historical roots, culture and civilization, is still suffering, and continues to suffer more death and destruction.