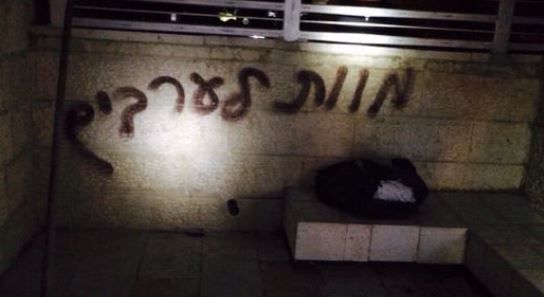 The “Hand in Hand Center for Jewish-Arab Education in Israel” has reported on Saturday at night that its two first-grade classrooms, in the Max Rayne Handed in Hand School in Jerusalem, were burnt and that anti-Arab graffiti was also sprayed on the walls.It said that firefighters rushed to the school and managed to contain the fire before it spread to other rooms, adding that the two classrooms were badly burnt.

On its Facebook page, Hand in Hand said deputy mayor of Jerusalem visited the school after the attack, and described it as an attack aiming at “sabotaging any real cooperation between Jews and Arabs.’

Hand in Hand CEO Shuli Dichter said following the attack, “Even if they stain our school walls, they will not succeed in destroying our work.”

Hand in Hand runs five schools with mixed Arab and Jewish students, and teaching the children using both Hebrew and Arabic language, and unlike other Israeli schools, it teaches the children about the Palestinian Nakba of 1948, and the “Israeli independence,” the Maan News Agency said.

On his Twitter account, senior Israeli journalist and author Yossi Melman wrote, “when will the Shin Bet (Internal Security), and the Police understand that Jewish terrorism will cause disaster to the Zionist project?”

Nadia Kinani, principal of Max Rayne School, told Israeli Walla News Agency that the school, parents and students will not be scared as they are doing a great job in this school, adding the attack will not deter the school and families from getting up in the morning and resuming classes.

Israeli fanatics are responsible for numerous attacks targeting Palestinian schools, orchards and farmlands, mosques and churches, and even graveyards, in addition to attacks targeting Israeli peace groups, activists and their property.