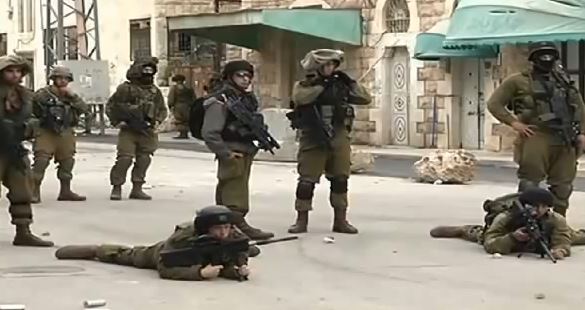 A third Palestinian was kidnapped in the town while heading back home from Jericho; he has been identified as Ayman Mohammad Barad’eyya, 22.

Mohammad Awad, spokesperson of the Popular Committee against the Wall and Settlements in Beit Ummar, said several soldiers stormed the home of Ekhlayyel, violently searched it causing property damage tore pictures of late President Yasser Arafat, before forcing Ekhlayyel’s father to take them were his son works, and kidnapped the son.

The invasion led to clashes between the soldiers and local youths, while the army fired gas bombs, rubber-coated metal bullets and rounds of live ammunition.

Many residents suffered the effects of tear gas inhalation, and received treatment by local medics.

A number of armored military jeeps also invaded Beit ‘Awwa town, southeast of Hebron, while many soldiers patrolled in its streets before withdrawing later on.

In addition, soldiers invaded the al-Fawwar refugee camp, south of Hebron, and Beit Kahel town, north of the city, and kidnapped two Palestinians.

In related news, local sources in occupied East Jerusalem said the soldiers and the Police have kidnapped thirteen Palestinian workers for “entering the city and working there without a permit.”

The soldiers also kidnapped a former political prisoner in the city.