Palestinian Injured After Settlers Assaulted Him In Jerusalem 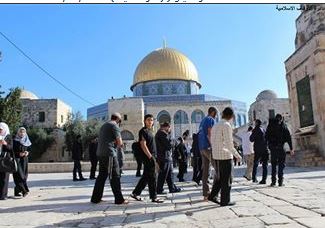 Palestinian medical sources have reported that a young man was injured after a number of fanatic Israeli settlers assaulted him at the Light-Rail Station in Bab al-’Amoud area, in occupied East Jerusalem. Settlers invade Al-Aqsa Mosque yards.Local sources said that around six Israeli settlers assaulted Majdi Majed Najeeb, 26, as he was buying a ticket to board the train, heading for work in West Jerusalem.

The settlers started punching, kicking and beating the young man, before one of them struck him with an iron object, and fled the scene.

Najeeb was moved to the al-Makassed Islamic Hospital in the city suffering various cuts and bruises, especially in his legs.

He said light rail guards witnessed the attack but did not intervene, and allowed the assailants to leave the area.
On Sunday at dawn, dozens of Israeli extremists invaded the yards of the Al-Aqsa Mosque, through the al-Magharba Gate, in occupied East Jerusalem, and conducted provocative acts against several Muslim worshipers.

Local sources said that dozens of soldiers accompanied nearly 50 settlers, in what was described as a “tour program,” before the settlers started shouting at Muslim worshipers, and demanded the army to remove them.

The soldiers also increased their deployment near the gates of the Al-Aqsa Mosque, and withheld the ID cards of dozens of women and young men, before allowing them to enter the mosque.