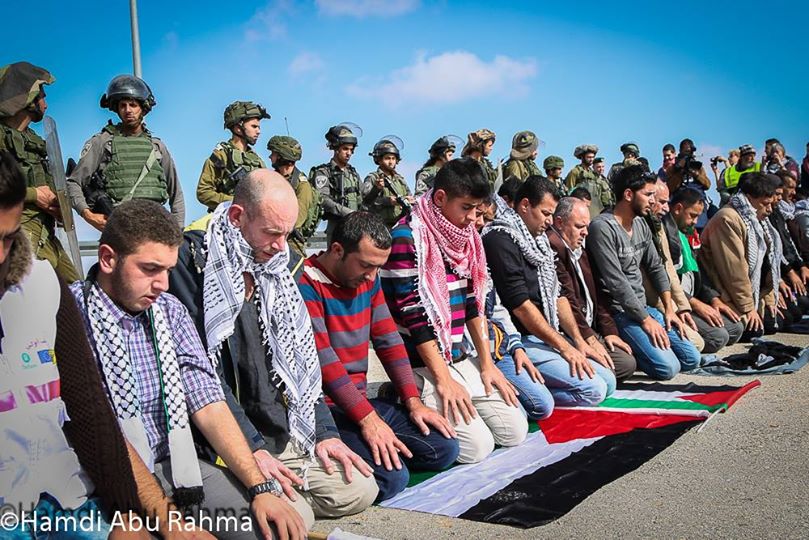 A peaceful protest by activists from Palestinian popular committees successfully blocked the Jerusalem – Jericho road Friday in their ongoing protest against Israeli policies to ethnically cleanse the Palestinian Bedouin communities from “Area C”.As Stop the Wall reported last month, Israel has accelerated “the infrastructure construction to build the West Bank Bantustans…systematically suffocating the Palestinian communities to force them to leave the area.”

Accompanied by international solidarity activists, they confronted heavily-armed Israeli forces who used tear gas and stun grenades to disperse them.

In September 2014 Israel published plans (#1418 and #1419) to forcefully evict thousands of Bedouins from their residences in Area C (although they didn’t use those words) and corral them into a new “Bedouin township” in Nuweimeh near Jericho, thus clearing the area for the expansion of illegal Israeli settlement around Ma’ale Adumim, Kefar Adumim, Rimonim, Yitav and other settlements in the area. According to the Jahalin Association, the plans would have the effect of “judaising [the land] from East Jerusalem down to Jericho.”

According to the Jahalin Association, the plan will involve the transfer of Bedouin families from the Jerusalem, Ramallah and Jericho peripheries across three different Bedouin tribes: the Jahalin, Kaabneh and Rashayda. This includes communities from the controversial E-1 area. The targeted Bedouin communities strongly object to the Nuweimeh plans for a host of reasons.

An expert legal opinion by Professor Marco Sassoli and Dr. Theo Boutrouche examined the case and concluded that if the plan were to be implemented it would constitute forcible transfer, prohibited under Article 47 of the Fourth Geneva Convention, which is a grave breach of the Convention and may amount to a war crime.

Activist said the main goal of protest, along with alerting people to the ongoing displacement of the Palestinian Bedouins, was “to confirm that occupied Jerusalem is a Palestinian capital and Palestinians have the full right to enter Jerusalem city freely”. For more information on the dire implications of these plans please check out the Fact Sheet as to the Implications of the E-1 Development/Displacement Plan.

The plans that Israel published in September are open to public objection until December 3rd. A sub-committee of Israeli Military governing body that controls Area C is authorized to approve the plans but after it has received objections it must consider those objections and hold a public hearing before issuing a decision, which can then be appealed to the Israeli High Court.

Lawyers and planners for the Bedouin communities will object to the plans and represent their clients at the hearings. To protest the Israeli relocation plan individual citizens and organizations, have standing to make such objections to The Subcommittee for Objections, Civil Administration, P.O. Box 16 Bet El 90631, and do not need to be represented at the hearing.

Article 49 of the Geneva Convention relative to the Protection of Civilian Persons in Time of War of 1949 reads as follows:

Individual of mass forcible transfers, as well as deportations of protected persons from occupied territory to the territory of the Occupying Power or to that of any other country, occupied or not, are prohibited, regardless of their motive.

Nevertheless, the Occupying Power may undertake total or partial evacuation of a given area if the security of the population or imperative military reasons so demand. Such evacuations may not involve the displacement of protected persons outside the bounds of the occupied territory except when for material reasons it is impossible to avoid such displacement. Persons thus evacuated shall be transferred back to their homes as soon as hostilities in the area in question have ceased… The Occupying Power shall not deport or transfer parts of its own civilian population into the territory it occupies

The forcible transfer of the Bedouin tribes living in Area C is not motivated by any imperative military reasons, nor is it being proposed in order to protect the civilian population from imminent danger arising from nearby military operations.