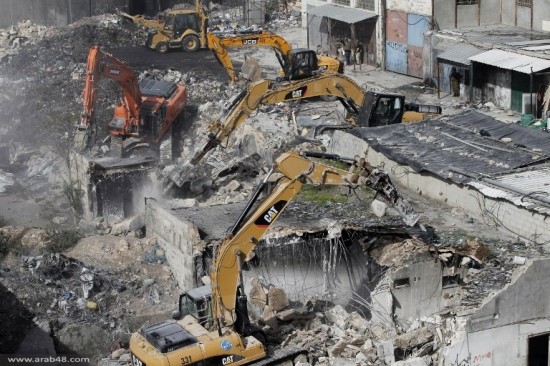 Medical sources have reported that at least 36 Palestinians have been injured; one seriously, after dozens of Israeli soldiers invaded the Shu’fat refugee camp, in occupied East Jerusalem, and demolished a building that contained 20 stores.The clashes in Shu’fat started after the soldiers demolished a large building, known as the Coca Cola building that contained 10 stores and 10 warehouses.

The building belongs to members of the Dajani family in occupied East Jerusalem.

Head of the Ras Khamis Development Committee in Shu’fat, Jamil Sandouqa, said the soldiers are trying to expand the military roadblock at the entrance of the camp.

Last year, the Israeli Supreme Court decided to remove the building and confiscate its land, for what it referred to as “security considerations.” The building was located right next to the Shu’fat military roadblock.

Amin Abu Ghazala, in charge of the Emergency Department Unit of the Red Crescent, has reported that 36 Palestinians have been injured; twelve of them by rubber-coated metal bullets, while one Palestinian suffered a serious injury in his eye, and was moved to the Hadassah Ein Karem Israeli Hospital, in Jerusalem.

He has been identified as Ammar Mohammad Ali, 21 years of age; local sources said he was standing in front of his meat shop.

A child was shot in the face, and a third Palestinian suffered a skull fracture; both were shot by rubber-coated metal bullets.

Abu Ghazala added that the soldiers stopped a Red Crescent Ambulance at the Qalandia Terminal, and confiscated its keys, while the medics were trying to move a wounded Palestinian to a hospital in Ramallah.

Dozens of residents suffered the effects of tear gas inhalation, while the soldiers used trucks to spray the residents, their homes and schools with waste-water mixed with chemicals, and fired gas bombs at schoolchildren.

Soldiers also placed concrete blocks in front of a building in the camp, occupied rooftops of several homes, and started firing at any resident walking in the streets after the army imposed curfew, forcing the entire refugee camp under house arrest.

A Palestinian identified as Nidal Fasfous, 35, was beaten by the soldiers who stopped his car, and detained him before violently assaulting and beating him causing a fracture in his nose, and various cuts and bruises to several parts of his body.

They added that the soldiers fired gas bombs and rubber-coated metal bullets at several shops, stores and homes.
The soldiers closed the Shu’fat roadblock, forcing the residents and cars to take an alternate road, through Hezma and ‘Anata, just to be able to enter the camp, and also installed a roadblock at the main entrance of ‘Anata.

Moreover, soldiers attempted to invade the Shu’fat Elementary School for Girls, run by the UNRWA, and fired gas bombs and concussion grenades at the students while trying to return home.

In related news, two Palestinians were shot by live rounds fired by an Israeli settler near the Beitello village, north west of the central West Bank city of Ramallah.

The two, identified as Ahmad Akram Ziyada, and Thabet Abdul-Karim Bazzar, have been moved to the Palestine Medical Center suffered moderate injuries.

Earlier Wednesday, a Palestinian child was shot and injured by a live round, fired by Israeli soldiers invading the ‘Askar refugee camp, in the northern West Bank district of Nablus; many residents suffered the effects of tear gas inhalation. http://www.imemc.org/article/69903