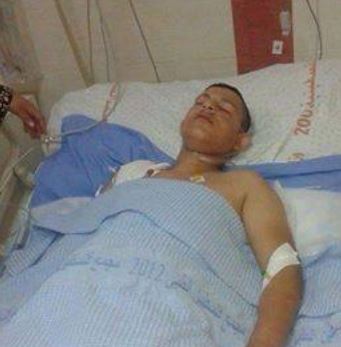 Medical sources have reported, Friday, that at least fourteen Palestinians have been injured by Israeli army fire, in several areas in the central West Bank district of Ramallah, and that one of the wounded suffered a serious injury.Several Israeli military vehicles invaded on Friday evening Sinjel village, east of Ramallah, and clashed with local youths, who hurled stones and empty bottles at them.

Medical sources said a Palestinian, identified as Islam Tawafsha was shot in the chest, causing severe bleeding in his lungs, after the soldiers fired rounds of live ammunition at him.

Two Palestinians, identified as Fakher Shabana and Tareq Shabana were also shot by live rounds in their legs.

All wounded Palestinians have been moved to the Palestine Medical Center in Ramallah.

Medical sources said the soldiers deliberately fired gas bombs and concussion grenades at several homes in the town, causing property damage, while scores of Palestinians, including children and elderly, suffered the effects of tear gas inhalation.

In Ni’lin village, west of Ramallah, at least four Palestinians were shot by rubber-coated metal bullets, and many suffered the effects of tear gas inhalation, after several military vehicles invaded the village.

Local sources said the soldiers assaulted several residents, and drove around in the village in a provocative manager, leading to clashes.

Five Palestinians have also been wounded during clashed with Israeli soldiers near the Ofer Israeli prison, built on Palestinian lands, west of Ramallah.

In addition, several Israeli military vehicles invaded the Sateh Marhaba neighborhood in the al-Biereh town, near Ramallah, and clashed with local youths, wounding two by rubber-coated metal bullets, while many residents suffered the effects of tear gas inhalation.

The Ramallah Today news agency said the soldiers shot Safi near the sand barrier the soldiers placed a few days ago, blocking the northern entrance of Beitello village junction.

Medical sources said the Safi was shot by two live rounds in his abdomen, and was moved to the Palestine Medical Center suffering a moderate-but-stable injury.