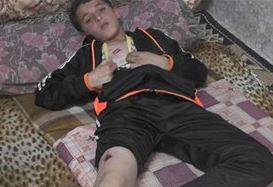 One Palestinian has been shot and injured, by an Israeli live round, during clashes that took place south of Hebron city, in the southern part of the occupied West Bank, medical sources have reported.Eyewitnesses said clashes took place between dozens of local youths and Israeli soldiers, after the army attacked hundreds of Palestinians marking the 27th anniversary of the establishment of Hamas Movement.

They added that the soldiers broke into an Islamic school, where the main gathering was held, smashed the festival podium, removed signs and flags, and attacked several residents, leading to clashes.

Following the attack, hundreds of Palestinians gathered around the school area before the soldiers fired dozens of gas bombs, and several rounds of live ammunition, moderately wounding one Palestinian by a live round in his leg.

Scores of residents received treatments for the effects of tear gas inhalation.

Soldiers also installed several roadblocks in the area, searched and interrogated dozens of Palestinians, and prevented them from crossing.

In addition, according to media sources affiliated with the Hamas movement, Palestinians security officers arrested, and detained, many members and supporters, while heading to the celebrations of Hamas.

The sources said the security forces attested Hotheifa Nizar Ramadan, one of the sons of legislator Nizar Ramadan, who is imprisoned by Israel, in addition to at least twenty other Palestinians.