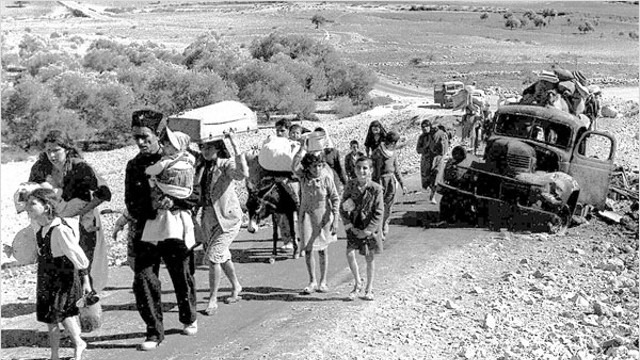 Imagine if in the U.S. it were illegal to teach about the genocide of the Native Americans at the hand of the colonists, or about how violent and gruesome the system of slavery was that brought North America to be a center of capitalist production. Imagine if you could be punished for simply mentioning the suffering of the indigenous people on Thanksgiving, or for questioning the nobility of Columbus on Columbus Day.Of course, for the most part the actual violent, bloody history of how the U.S. was founded is rarely mentioned in most school lessons or mainstream media, but simply mentioning these things is not in itself illegal.

On the contrary, in Israel, any institution with public funding that mentions, teaches, or mourns the country’s analogous event, the Nakba (Arabic for “catastrophe”) can be fined, and for their involvement individuals can be sentenced to prison.

Recently this law threatened to cause trouble for the Israeli non-profit organization Zochrot as they prepared for their second annual “48 mm—International Film Festival on Nakba and Return” in Tel Aviv.

This year’s festival, which was attended by hundreds of people, mostly Israeli, featured three film shorts made by Israeli directors specifically for the weekend, as well as longer films made in Palestine, Israel, and abroad on the subject of the Nakba and the right of return for Arab refugees. Highlights of the festival this year included Mahdi Fleifel’s A World Not Ours, which documented life inside a Palestinian refugee camp in Lebanon, including the residents hopes, dreams, and depressions; Fida Qishta’s Where Should the Birds Fly, a “visual documentation of the Goldstone Report,” that showed Israel’s horrific Operation Cast Lead of 2008-9 against the Gaza Strip and spent time with several young survivors of the attack; and the Israeli premier of the film A People Without a Land, Eliyahu Ungar-Sargon’s compelling documentary that takes a thorough look at both Israeli and Palestinian society before taking on the question of a solution to the “conflict.”

Zochrot, which means ‘remembering,’ is an Israeli non-profit organization that seeks to raise public awareness of the Palestinian Nakba among Israelis, and advocates for the right of return of Palestinian refugees to Israel.

The group believes that the process of Israelis taking responsibility for the Nakba is necessary for any just and lasting solution and so works through different means to raise awareness about the Nakba in Israeli society.

While the group organizes several types of activities such as tours, protests, and forums, they see film and art as a unique way to reach a new audience that otherwise might choose to ignore what they have to say.

“We think that through art or through film it’s easier for people to take in things and it’s a way to reach people that may not be reached in other way,” said Shira Hertzanu, the Public Engagement Director of Zochrot. Hertzanu added that though many people who came to the festival could be considered the “expected” crowd, many other people came not for the politics, but for the cinema. “So it’s a way of reaching new people,” she said.

The date of the yearly festival is chosen intentionally to mark the anniversary of the November 29th 1947 United Nations partition resolution, which set the legal basis for the creation of a Jewish state and an Arab state in Palestine. This year was the 67th anniversary of the plan, which, as Zochrot described in a statement, “fixated the idea of partition and separation between Jews and Arabs in historical Palestine and was a key milestone in the ongoing conflict and the uprooting of hundreds of thousands of Palestinians.”

“The festival seeks to creatively challenge the partition concept and suggest new pathways for just and equitable life for all of the country’s present inhabitants and refugees,” Zochrot said.

This year however, and at a time when the country has experienced escalating tensions over the last couple months, the Israeli Ministry of Culture and Sport decided such a festival would be pushing things too far.