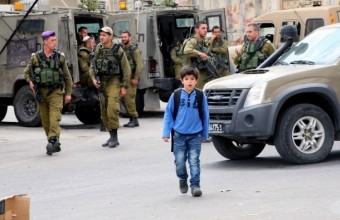 Israeli police, on Tuesday, attempted to arrest two preschoolers during a raid on two homes in the occupied East Jerusalem town of Silwan, according to witnesses.WAFA correspondence reports that police raided the home of Mr. Mohammad Abd al-Raziq, in the Bir Ayoub neighborhood of Silwan, in search of two children aged three and five, for allegedly throwing rocks at them.

The officers left the house after threatening the father with arrest.

According to the Euro-Mid Observer for Human Rights, Israeli authorities seized an estimated 2,500 Palestinian children and youth between January of 2010 and June of 2014 — with approximately 400 of them between the ages of 12 and 15.

Meanwhile, Israeli police raided another house in Silwan town, where they assaulted Mr. Khaled al-Siyori, his wife, Hayya, and two children, Khaled and Raed. The family was transferred to a hospital for treatment.

Police additionally raided a Silwan boys’ school, in Ras al-Amoud, under the pretext that they had thrown fireworks at them. No abductions were reported.

Meanwhile, police stormed the neighborhood of Ein Lawza, also in Silwan, where they kidnapped Yazan Abbasi, age 11, and Ahmad Abbasi, also 11, as they were leaving school to home. There were no confrontations reported at the time of the incident, nonetheless.

A report published by UNICEF, in 2013, stated that the “ill treatment of children who come in contact with military detention system appears to be widespread, systematic, and institutionalized throughout the process from the moment of arrest until the child’s prosecution and eventual conviction and sentencing.”

WAFA further reports that Israeli police and army forces often target schools and other educational facilities, which is a violation of international law and relevant human rights which affirm children’s right to pursue their education without being targeted at times of conflict.