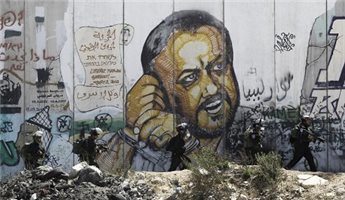 He says he has always urged the leadership to take the question of Palestine to the UN to obtain a security council resolution, but any proposal must be in-line with inalienable national principles.

Barghouti further urged leadership to comprehensively revise the wording of the draft resolution to focus on the major issues of settlement expansion, Jerusalem, prisoners, and the blockade on the Gaza Strip.

He added that any talk of land swaps will weaken the Palestinian right to self-determination and a sovereign state on Palestinian territories occupied in 1967, noting that such a measure would be used to legalize settlement building.

Mr. Barghouti said that the PA must also confirm that settlements are illegal, war crimes, and must be removed.

Leadership must also demand that currently occupied East Jerusalem is the capital of the State of Palestine, in addition to insisting on the right for Palestinian refugees to return to their former homes in Israel, in line with UN General Assembly resolution 194.

The leader also criticized the draft resolution for not including the issue of Palestinian detainees:

‘Though the issue of prisoners isn’t part of the final status core issues, it should be confirmed in any resolution that freeing all prisoners is an absolute right and a precondition for peace.’

The draft resolution, he says, should also include an immediate demand to end the ‘crippling siege’ imposed on Gaza, especially after the ‘massacres’ committed against the Palestinian people this summer.

‘We must stop negotiating with ourselves uselessly,’ he added.

A senior figure within the Fateh, he was arrested in 2002 and sentenced two years later.