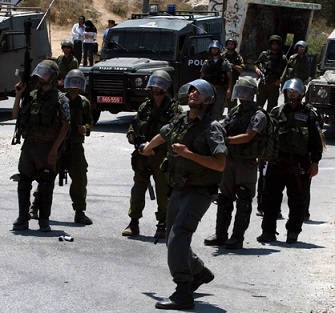 Soldiers also invaded the al-’Isawiyya town, in the center of Jerusalem, and kidnapped three Palestinians; two of them have been identified as Bara’ Mahmoud, 16, and ‘Ali Abu al-Hummus, 14.

In addition, the army kidnapped a child identified as Nasser Fares from Ras al-‘Amoud in Silwan, and another child, identified as Khader Daoud from at-Tour neighborhood overlooking the Old City.

On Tuesday evening, soldiers kidnapped Saif ‘Obeid and Dia’ ‘Obeid in Bab al-Amoud in the occupied city. The two are from the town of al’-Isawiyya.

Late on Tuesday at night, a number of fanatic Israeli settlers attempted to invade the village of Qasra, south of the northern West Bank city of Nablus, but members of the local nonviolent resistance committee intercepted the attack, and pushed the settlers out of their village.