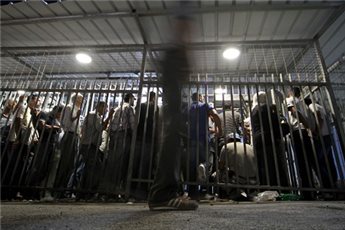 A Palestinian man from the occupied West Bank village of Farun died Wednesday morning, after being crushed to death inside an Israeli checkpoint near Tulkarem, while trying to get to work.Witnesses said, according to Ma’an News Agency, that 39-year-old Ahmad Samih Bdeir, who was on his way to a construction job inside Israel, choked to death in extreme overcrowding amid large numbers of people trying to cross the al-Tayba checkpoint, also called ‘Shaar Efrayim’.

The death is the second at al-Tayba this year, now, after 59-year-old Adel Muhammad Yakoub also died as a result of extreme overcrowding at the checkpoint, in early January.

Inspection procedures at the checkpoint typically take hours, Ma’an reports, as every person must pass through metal turnstiles one-at-a-time.

The turnstiles are controlled by Israeli soldiers from hidden posts, and workers frequently complain about unnecessary delays caused by checkpoint staff (typically teen-aged conscripts finishing out their compulsory military service).

Furthermore, following the revolving gates are metal detectors and inspection stations.
Palestinians are often herded into metal pens inside these checkpoints, are unable to leave or enter, while Israeli soldiers rarely respond to requests for movement from those crammed inside.

Sources within the Palestinian Federation of Trade Unions said that more than 15,000 Palestinian workers pass through al-Tayba checkpoint every day, and that the checkpoint is operated by the Israeli military as well as by private Israeli security companies.

Ma’an further reports that, little more than a week ago, more than 5,000 Palestinian workers refused to cross the checkpoint in the morning, in protest of the humiliating inspection procedures.