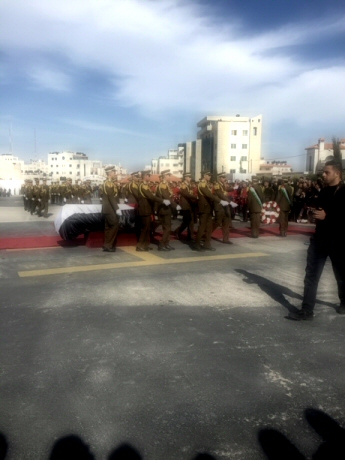 The Israeli soldier whose direct involvement in the death of Minister Ziad Abu Ein, early December 2014, was acquitted of all charges after a military investigation.According to WAFA Palestinian News & Info Agency, an Israeli television broadcast revealed that an investigation, conducted by the Israeli army’s General Officer in Central Command Nitzan Alon, absolved the soldier of wrongdoing against the late minister’s Death.

The Army’s General Commander stated that the soldier acted properly at the time of the confrontations, when soldiers scuffled with Palestinians peacefully rallying near the Ramallah village of Turmusayya, on the occasion of the UN-designated ‘International Year of Solidarity with the Palestinian People’.

Videos circulating on social media showed that Abu Ein was grabbed by his throat and hit in the chest with the butt of an Israeli soldier’s gun. He was severely assaulted by Israeli soldiers before fully collapsing to the ground. Abu Ein went into a coma and was later pronounced dead.

An autopsy conducted by Palestinian and Jordanian pathologists, along with an Israeli forensic doctor who also joined the examination, revealed that the minister’s death was caused from a combination of being struck and from inhaling tear gas.

The autopsy showed that ‘blockage of the main coronary arteries that deliver oxygenated blood to the heart muscle were caused by hemorrhaging under the plaque layer. The change in the layer (bleeding) can be caused by stress,’ media outlets reported, based on the revelation of the health ministry in Jerusalem.

The autopsy also showed that Abu Ein also suffered from a wound to his front teeth, bruises on his tongue, neck — from both right and left sides — and further bruises on the thyroid cartilage. The results additionally revealed traces of teargas.

Israeli media reported on the doctor who participated in the autopsy, Hen Kugel, saying that the wound to Abu Ein’s teeth and windpipe does not matter, and that he died because of his heart and stress.