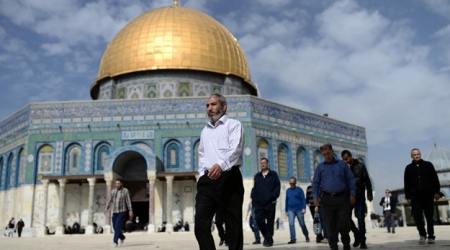 Israeli police stated, Monday, that they had closed down three NGOs affiliated with the Islamic Movement in northern Israel, which is known for defending Al Aqsa Mosque against extremist Jewish settlers.Israel’s Shin Bet domestic security agency said that it shut down the three organisations in the town of Nazareth that had been set up last year by the Movement, which has a following among Palestinians living in Israel.

Al Ray, via World Bulletin, cited Shin Bet’s allegation that the groups – Al Aqsa Champions, Muslim Women for Al Aqsa and Al Fajr Foundation for Culture and Literature – paid activists to use ‘verbal and even physical violence’ against visitors to the Jerusalem shrine, with the goal of ‘agitating and stirring up emotions.’

Israeli police stated that the closure of the institutions was based on an order by Israeli public security, Minister Yitzhak Aharonovitch, according to Israeli radio.

The Internal Security Agency, meanwhile, claimed that a security assessment showd that the two institutions had been suspected of funding activities of both the Islamic Movement in northern Israel and Gaza-based political party Hamas.

The agency added, in a statement, that the two NGOs had allocated some money to fund the activities of the two movements which, according to it, violated Israeli law.

It said that the two institutions paid salaries of people who go to the flashpoint of Al Aqsa Mosque, in East Jerusalem, every day.

The Islamic Movement denied the accusations in a statement relating to two of the groups:
Al Aqsa Champions is ‘a media organization (that is) professional and balanced and focuses only on events inside the mosque,’ and Muslim Women for Al Aqsa ‘organises study for women inside the mosque.’

Police said that offices of the two NGOs had been raided by security forces, where computers and documents related to their accounts had been seized. According to the statement, some officials of the two institutions had also been detained.

Muslim Women for Al-Aqsa, one of the NGOs raided, stated that a large number of Israeli policemen had raided its office in Nazareth and confiscated equipment. Additionally, female workers had been detained by Israeli forces during the raid.