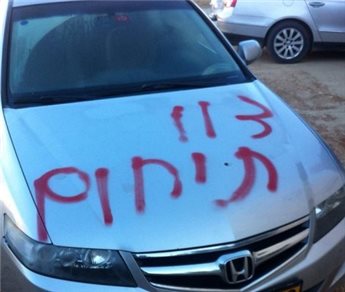 Extremist Jewish vandals, on Wednesday morning, punctured the tires of vehicles parked outside the homes of their Palestinian owners, in the Jerusalem district village of Beit Safafa, witnesses told Ma’an News Agency. Residents of al-Izzah Street, preparing to go to work, were surprised to find that 11 vehicles were demobilized and sprayed with hate graffiti in the Hebrew language.

George Zambil, whose vehicle was attacked, told Ma’an that all four tires of his car and all other vandalized vehicles were punctured. The cars, he said, belong to the Ulayyan, al-Ashhab and al-Nabir families, in addition to his own.

He also stated that the attack was not the first of its kind in his neighborhood.