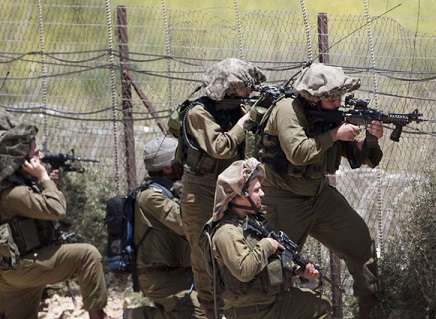 Israeli soldiers fired, on Thursday morning, rounds of live ammunition at Palestinian farmers in the eastern area of the Khan Younis District, in the southern part of the Gaza Strip, and the al-Maghazi refugee camp, in Central Gaza.Media sources in Gaza said Israeli soldiers, stationed on military towers, and in vehicles, across the border fence, fired rounds of live ammunition into farmlands east of the al-Qarara town, and the al-Faraheen area, east of ‘Abasan town, both in Khan Younis district.

The sources added that the sporadic army fire was carried out for a few hours, forcing the farmers to leave their lands.

Many military vehicles have been seeing driving across the border fence, especially near the Kissufim and Sofa military bases, near the northern and southern borders of Gaza.

In addition, the soldiers fired rounds of live ammunition into the eastern area of the al-Maghazi refugee camp, in central Gaza, targeting a number of buildings and farmlands in the area.