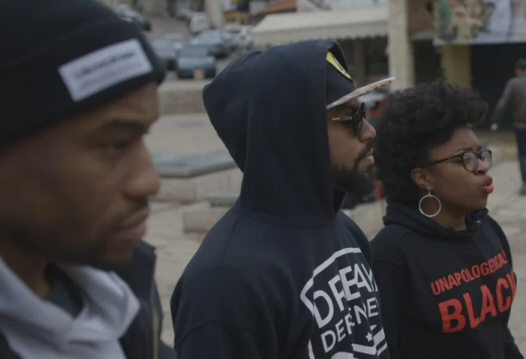 A group of activists for racial justice in the United States have released a video filmed in Nazareth, in solidarity with the Palestinian struggle against Israeli apartheid.According to Ma’an News Agency, the video was filmed at the conclusion of a ten-day tour by representatives of groups associated with black rights and racial justice, including the Dream Defenders, Black Youth Project 100, Black Lives Matter, and activists associated with the Ferguson movement against police brutality.

Organizers said that the video shows a ‘solidarity demonstration as a call for support of the Boycott, Divestment, and Sanctions campaign that was called for by Palestinian civil society in 2005,’ and contains a number of messages from activists, artists, and poets highlighting the connections between the oppression face by Palestinians and the struggles of youths of color in the US.

Journalist Marc Lamont Hill is seen in the video introducing the rally by saying: ‘We came here to Palestine to stand in love and revolutionary struggle with our brothers and sisters, we come to a land that has been stolen by greed and destroyed by hate.’

‘We come here and we learn laws that have been co-signed in ink but written in the blood of the innocent and we stand next to people who continue to courageously struggle and resist the occupation, people continue to dream and fight for freedom, from Ferguson to Palestine the struggle for freedom continues.’

Other participants in the video, filmed at a square in front of the Greek Orthodox Church of the Annunciation, in the heart of Nazareth’s Old City, recite poetry and spoken word before finishing with chants expressing solidarity between black struggles in the US and the fight against Israeli occupation in Palestine.

One of the tour participants, Black Lives Movement founder Patrisse Cullors challenged people around the world to recognize the state of racial separation in Israel:

The release of the video comes only two months after a group of Palestinian students toured the United States sharing their experiences and connecting with advocates for racial justice in the country. The delegation, associated with the Right to Education campaign, held an event in solidarity with the black struggle in the US, at Birzeit University, in December.

Ma’an further reports that the video, fittingly, was filmed in a city considered to be the capital of the 1.2 million-strong community of Palestinian citizens of Israel.

Although 80 percent of Palestinians inside what is now Israel were expelled in 1948 and prevented from returning by authorities, residents of Nazareth are among the approximately 125,000 who managed to stay.

They lived under military occupation until 1966 and, today, continue to face discrimination in all aspects of life.