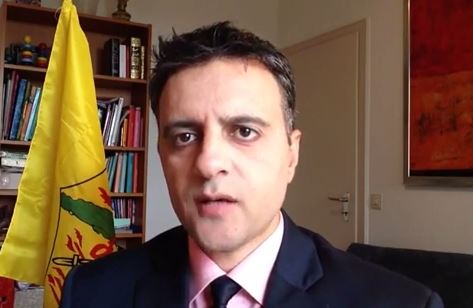 Dr. Jamal Nazzal, the spokesman for the Palestinian Fateh Movement and member of its Revolutionary Council, arrived in the Danish capital Copenhagen on Saturday.

Dr. Nazzal’s arrival in Denmark could suggest that initiatives aim at making Denmark follow its Scandinavian neighbors Sweden and Norway in recognizing the Palestinian State.

Speaking with Dr. Jamal Nazzal over the telephone: Dr. Nazzal replied to a question in that regard, saying that Fateh of course hoped that talks with colleagues in Denmark and at the United Nations would help bring about a change in Denmark’s policy.

Asked whether the 1993 Oslo Accords still were alive after Israel’s latest violation of its provisions by withholding Palestinian tax revenues, Dr. Nazzal replied that Palestine, as a State, is committed to all treaties which it has signed, including the Oslo Accords.

He stressed that this is the case regardless whether Israel violates its provisions or not.

Dr. Nazzal stressed that there is an immediate and urgent need for the establishment of a Palestinian State and an end to certain European counties and the United States’ policy to give Israel card blanch for violating the Oslo Accords and international law.

He added that it was this policy to give card blanch to any of Israel’s violations of the Oslo Accords and crimes under international law that ultimately forced Palestine to walk away from two decades of negotiations.

Earlier this month, UN Secretary-General Ban Ki-moon confirmed that Palestine has UN Observer State Status and that it therefore would be admitted as a member of the International Criminal Court (ICC) on April 1, 2015.

With regards to an eventual prosecution of Israeli citizens by the ICC Dr. Nazzal recognized that Israel has not submitted its citizens to the ICC’s jurisdiction.

He added however, that there have been special ad hoc tribunals like the ICTY before the establishment of the ICC, and that he considers it as a positive step in the right direction that the ICC has launched a preliminary investigation.

Dr. Nazzal added that Israelis committed crimes within the territory of Palestine which has acceded to the Rome Statute and becomes a full member of the ICC in April.

On the issue of the U.S. Senate’s adoption of the StopGap bill that directs the U.S.’ administration to cut funds for the Palestinian Authority if Palestine lodges complaints against Israeli citizens at the ICC Dr. Nazzal stressed that this legislation was counterproductive.

Moreover, he stressed, that it is a form of collective punishment of 170,000 public employees and their families who depend on their wages.

He added that Palestinians are an intelligent people and that they know what the legislation aims at and which forces were at work behind it.

The Fatah spokesman for Europe stressed that Fatah and Palestine appreciated the recognition of Palestine by certain European States, but that a recognition required more than lip service.

Dr. Nazzal stressed the urgent need for a UN Security Council resolution that puts an end to the Israeli occupation of Palestine and other concrete steps.

Among others, he suggested that there is a need to convey to Israel that non-compliance with international law would result in economic and other consequences.

He added that ‘radical Islamist movements including Hamas and Egypt’s Muslim Brotherhood are part of this radicalization process.’

He stressed that such organizations in fact serve colonialist or trans-nationalist interests by weakening the PLO and Arab governments who lead a Pan-Arab policy based on the principle of national sovereignty.

Dr. Nazzal concluded that it is well-known that Israel has supported radical Islamist movements to weaken the PLO and Arab States who oppose Israel’s regional hegemony.

NSNBC international is free to read and free to subscribe to, because the need for daily news, analysis and opinion, and the need for independent media is universal.

The decision to make NSNBC international freely available was made so all, also those in countries with the lowest incomes, and those inflicted by poverty can access our daily newspaper.

To keep it this way however, we depend on your donation if you are in a position to donate a modest amount whenever you can or on a regular basis.

Besides articles from NSNBC’s regular contributors and staff writers, including it’s editor and founder, Christof Lehmann, it features selected articles from other contributors through its cooperation with media partners such as Global Research, The 4th Media, Aydinlik Daily, AltThaiNews Network, New Eastern Outlook, The Cairo Post and others.