“We believe in a bright future…a future when our children will be free.” 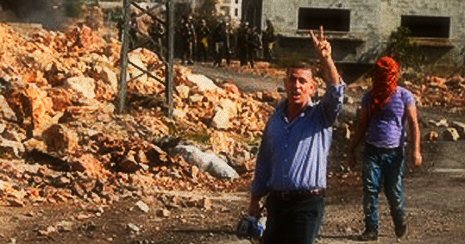 Murad Eshtewi was released from prison on January 22, 2015. He was arrested on April 29th, 2014, serving 10 months in Israeli military prison.

In order to secure his release, he was forced to pay a fine of 10,000 shekels (approximately $2500 USD), a fine that reduced his sentence in jail. Murad, a resident of Kufr Qaddum, was charged with organizing demonstrations and encouraging Palestinians to participate in political action. The village of Kufr Qaddum has held a weekly demonstration every Friday since 2011, in protest of the closure of their main road to Nablus by Israeli forces for the neighboring illegal settlement Qedumim.

On April 29, 2014, at 2:30am, Israeli forces surrounded Murad´s family house. Knowing that he was going to be jailed for a long time, Murad asked the soldiers if he could kiss his children goodbye. Israeli soldiers then covered his mouth, and made him walk 1.5 km in the dark to a nearby illegal Israeli settlement, where he was detained for 9 days. During this period, has was given very little water or food, and he lost 10kg.

He was eventually transferred to Megiddo, an Israeli military prison. Murad describes the horrible conditions he faced there; prisoners were not given enough food or blankets and any other necessities had to be purchased from the prison canteen at grossly inflated prices. The food that was provided did not constitute a balanced diet. Food and blankets brought in to prisoners from visitors were not permitted. Existing medical facilities in the prison were extremely limited; Murad described his own medical issues and the failure to receive adequate treatment. Facing shoulder pain, he was given only moderate pain-relievers, and told to drink water. His pain increased to the point that he was unable to lift his arm. The medical practitioners distributing ´care´ were often the same soldiers who had beaten prisoners earlier that week. Prison conditions gave no opportunity for activity to those detained; Murad recounts having nothing to do except ¨count the days, seconds, until freedom. I could not see the sky.¨
Prisoners detained for legal violations, such as theft, are permitted to work and call their families, whereas those detained under Israeli military law (political prisoners) are not awarded the same privileges. Their contact with the outside world is limited to one 45 minute visit from family, every two weeks, if that. Murad expressed feeling like a ¨dead man¨ while imprisoned, and that he has been ¨born again¨ since his release.

This was Murad´s fourth arrest, with the longest sentence and highest fine. Before receiving his final sentence, he had 19 court dates over eight months in Israeli military courts. Despite all that he has endured under direct Israeli repression, Murad is adamant in his determination to continue the struggle for Palestine. He sees the issues facing his village of Kufr Qaddum as symbolic of the bigger issues of the Israeli occupation: restricted movement, injuries, house damage, arbitrary arrest, imprisonment and murder of Palestinians. But he asserts: ¨In the face of this bad situation, we will do anything. We do not deny the right of anyone to live happily in their land. Let Israel do that in their state. Just let Palestinians do the same. No one can prevent me from my right [to do this], except death. I will not be ready to let my son or friends live under occupation. [I have made] an internal promise between me and me, and between me and Palestine to fight for Palestine.¨

Murad´s house was flooded with visitors upon his release, happy to welcome him home and back to his village. Murad is ecstatic to be re-united with his family and children, and continue the struggle for Palestine´s freedom. ¨The smile is still on our faces, because we believe in a bright future. A future when our children will be free, and we will continue to fight for this future.”