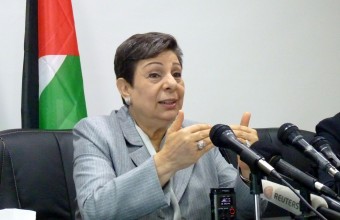 PLO Executive Committee member Dr. Hanan Ashrawi, in response to the Canadian government’s recent decision to terminate a contribution agreement it had between MIFTAH and the Canadian Department of Foreign Affairs, says that Canada is indulging in political blackmail at the expense of Palestinian civil institutions.The project was terminated shortly following Dr. Ashrawi’s response to Canadian Foreign Minister John Baird’s insistence that the Palestinians are making a ‘huge mistake’ by going to the ICC by asserting that acceptance of such a notion is allowing Israel to persist in its violations and war crimes.

‘Israel is enabled by apologists like John Baird to persist with the support of self-appointed advocates who become complicit in these war crimes,’ Dr. Ashrawi said.

The Representative Office of Canada had requested that Dr. Ashrawi accompany the Canadian Representative on a visit to the project and, later, she was asked to write a letter expressing gratitude for this specific Canadian project.

As Head of the Board of Directors, Dr. Ashrawi has no executive authority nor has she ever issued such statements or carried out such visits in relation to MIFTAH’s projects.

Dr. Lily Feidy, as CEO of MIFTAH, is the proper addressee for all such responsibilities; however, the Canadian Representative Office insisted it should be done by Dr. Ashrawi herself.

In response, the project was suspended and the agreement terminated.

Dr. Ashrawi commented: ‘The Palestinians and their institutions are not up for sale, and should not be subjected to extortion. Canada’s decision to end the cooperation agreement is a blatant attempt to extract political concessions in return for economic support for projects.’

Dr. Ashrawi issues political and policy statements as a member of the PLO Executive Committee and, in this capacity, her role is completely separate from her volunteer work in civil society organizations.