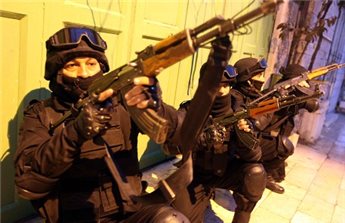 Three Palestinian security officers were injured in armed clashes, Thursday morning, between Palestinian security officers and gunmen in the Balata refugee camp, east of Nablus in the northern West Bank.Security sources said, according to Ma’an News Agency, that the officers came under fire just as they entered the camp, which is the biggest in the West Bank, in an attempt to arrest a number of fugitives.

Palestinian security described the gunmen who fired at the security officers as ‘outlaws’.

Locals in the camp said that several vehicles were damaged as a result of crossfire. They said that gunmen from Balata completely closed the main street near the camp to traffic. Schools were also closed in the camp.

The governor of Nablus, Akram Rajoub, held a meeting in his office with Nablus district representatives of Palestinian factions, trade unions, sports clubs and dignitaries to discuss the situation. He noted that the security crackdown in the district targeted outlaws, drug dealers and gunmen who attack Palestinian organizations and individuals.

The decision to carry out an intensive security campaign came only after ‘all quiet and smooth means’ have failed to bring the fugitives and outlaws to justice. ‘We won’t allow whoever to encroach upon people through thuggery, as it can’t be accepted anymore to undermine the dignity of our people,’ he said.

Rajoub denied claims that the security crackdown was ‘singling out a certain area.’

Activities, he said, are going on everywhere across the governorate. He confirmed that intensive security activities would continue quietly ‘without negatively affecting people’s lives or annoying anyone’.

Speaking on behalf of the participants in the meeting, deputy chairman of Nablus chamber of commerce Omar Hashim said that keeping peace and order is a collective responsibility which all social groups and organizations should cooperate to achieve.