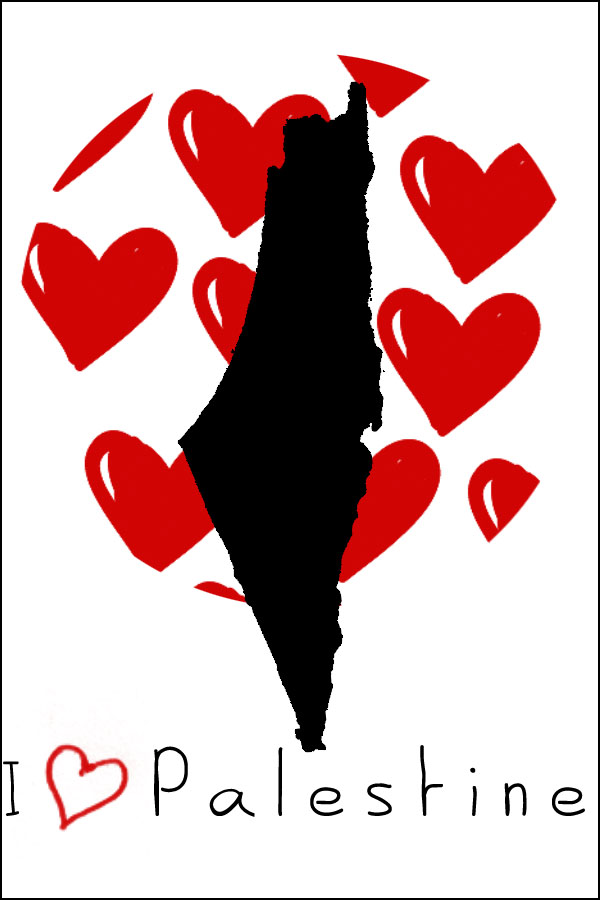 As the Israeli government, with American complicity, continues to build up illegal settlements in the West Bank (which cut through Palestinian villages separating families and communities), and the almost eight year siege of Gaza creates the world’s largest open air prison — Palestine’s Day is one of the simplest ways to celebrate the Palestinian people by standing with them on this, the day of love.

Dr. Maya Angelou once said, “Love recognizes no barriers. It jumps hurdles, leaps fences, penetrates walls to arrive at its destination full of hope.” With an enormous separation wall erected by Israel on Palestinian land and barbed wire fences blocking Palestinians from crossing that pervasive wall, it seems almost impossible to find any hope in the midst of all of this.

But, the Palestinian people do. Dr. Angelou said, “love recognizes no barriers.” No truer words have been recorded. Despite many barriers, checkpoints, concrete blocks, razor wire, and Jewish-settler-only roads cutting through the West Bank; these barriers are not recognized by the love of humanity.

I recently met a young Palestinian man called Ziad who lives in Bethlehem on this side of the Israeli barrier wall. Ziad’s girlfriend lives on the opposite side of the wall. The two young lovers have found a way to communicate by passing love letters through the holes knocked in the wall by people–Palestinians and international solidarity volunteers–who were fearless enough to risk arrest, and maybe worse, just to burst through the wall. Love recognizes no barriers.

In the darkest of days when the Israelis invade West Bank villages to block off main roads and then go house to house searching for young Palestinians without warrant or cause for arrest, it can seem that hope is lost. It can seem desperately lonely. These young Palestinians can feel as if the world has forgotten them. But, somehow, hope remains. Perhaps these young men and women have been conditioned to believe that these illegal searches and kidnappings are a part of everyday life and thus accept them as the way things are.

Then there is Valentine’s Day. This international day of lovers has become a popular day in Palestine, where cards are exchanged, florists are busy creating beautiful arrangements for sweethearts, and chocolates abound. The juxtaposition of a beautiful floral arrangement sitting on the coffee table of a house recently ransacked by Israeli soldiers is an image foreign to many of us. But, this is life in occupied Palestine. And, life goes on.

On Twitter this Valentine’s Day there is a hashtag campaign known as #HappyPalestineDay or simply #PalestineDay. This movement is an organic way of reminding all the lovers that the people of Palestine exist and are deserving of understanding and respect. So, as we celebrate our sweethearts, send balloons and candy and stuffed animals, let’s take a moment to also celebrate the many Palestinians who are suffering under the brutal occupation. Let’s remember Ziad and his girlfriend who are separated by a terrible concrete wall. Let’s recall the villages which have been cut off by this illegal wall and think about the lives of those who are forced to circumvent the wall to connect with friends and loved ones on the other side.

When you go to Twitter on this Valentine’s Day, send a tweet out with the hashtag #HappyPalestineDay to demonstrate solidarity with those who are separated physically by barriers. But, let us remember what Dr. Angelou said so eloquently all those years ago: Love recognizes no barriers.

#HappyPalestineDay to all the lovers.