Soldiers Use Excessive Force Against Nonviolent Protest In Hebron 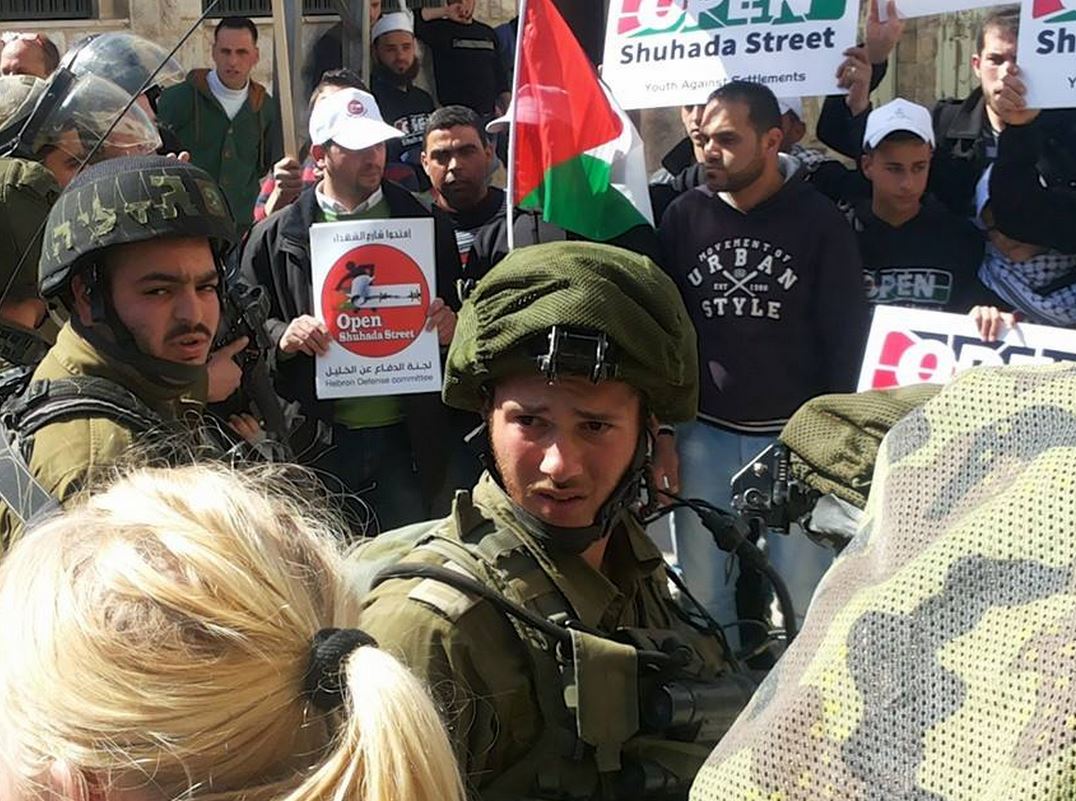 Israeli soldiers attacked, on Friday, a nonviolent protest organized by hundreds of students in demand that the army reopen Shuhada Street in Hebron, in the southern part of the occupied West Bank. At least 15 Palestinians were injured, with two reported kidnappings.The soldiers fired rounds of live ammunition, gas bombs and rubber-coated metal bullets, wounding three with live fire and twelve with rubber-coated metal bullets; many others suffered the effects of tear gas inhalation.

The three Palestinians injured by live fire have been identified as Abdul-Majid ‘Amro, Issa Mahmoud ‘Amro, and Anas ‘Amro.

One of the kidnapped Palestinians is Hijazi ‘Obeido, age 22, a law student and activist with the Youth Against Settlements Coalition that organized the protest, along with various national and Islamic factions, in addition to a number of Popular Committees from different parts of the occupied West Bank.

Shuhada Street, and all of its shops and stores, have been shut down by the Israeli military for 21 years, now, after Israeli-American Baruch Goldstein stormed the Ibrahimi Mosque and opened automatic fire on worshipers, on February 25, 1994, killing 29 and wounding more than 200, before some managed to subdue and kill him.

Issa ‘Amro, coordinator of the Youth Against Settlements Coalition, said that the soldiers used excessive forces against the nonviolent protesters who marched in a human chain, expressing their commitment to national unity and rejecting the colonial occupation of Palestine by Israel.

He added that the protesters challenged the ongoing construction and expansion of colonies in occupied Palestine, as well as the planned visit of Israeli Prime Minister, Benjamin Netanyahu, to Hebron and the Ibrahimi Mosque, at the beginning of next month, as part of his provocative election campaign.

It is worth mentioning that members and supporters of different Palestinian factions, including Islamic factions and left-wing parties, in addition to representatives of various institutions, social and political figures, participated in the procession.

Local activist, ‘Adnan Da’na, said that the protest came together to raise a united voice against the occupation and its colonies, to demand the opening of Shuhada Street and an end to all Israeli restrictions and violations.

Da’na added that Palestinians will continue to resist the occupation and its colonies, until the liberation of Palestine is achieved.

Fahmi Shahin, member of the Political Bureau of the leftist Palestinian People’s Party, said that the protest is part of ongoing activities and contiguous national struggle against the illegal occupation, its apartheid colonies and policies.

He called for voiding all commitments made by the Palestinian Authority with Israel, topped by stopping all manner of security coordination, voiding the Hebron Protocol that divided and isolated the Palestinian area, in addition to voiding the Paris Protocol.

Legal activist Ahmad Jaradat said that Netanyahu and other fanatical right-wing Israeli parties are trying to show off, in their media campaigns, by proving who can further isolate and oppress the Palestinian people.

Hebron Defense Committee member Bassam Shweiki explained that the yearly Palestinian march not only marks the massacre committed by Goldstein but the escalating violations committed by Israel since the massacre took place.

Shweiki told the IMEMC that Palestinians are saying, “Enough is enough, it is time to end this brutal occupation and remove the illegal colonies.”

“This protest comes to mark the 21st anniversary of the Ibrahimi Mosque massacre that led to the death of 29 worshipers in the Ibrahimi Mosque. We are also marching to demand opening Al Shuhada Street, closed by Israel 18 years ago,” Shweiki said. “The army met our nonviolent protest with excessive use of force, firing at us and attacking us. This attack is a clear political message from the government of Benjamin Netanyahu regarding its hostile and colonialist intention.”

The Hebron Defense Committee issued a statement denouncing the ongoing complete and partial closure, by Israel, of more than 520 Palestinian stores in the heart of Hebron city, especially since there are more than 100 military roadblocks with numerous concrete obstacles, while the army continues to prevent Palestinians from driving on various main roads, topped by Shuhada Street, as Palestinians aren’t even allowed to walk on it.

“Those restrictions forced owners of 700 more stores to shut down, and forced many families to leave,” the committee said, “but the Palestinians will continue resisting this occupation, and will remain steadfast.”

“This protest, and all forms of popular struggle, are solidarity campaigns that carry the struggle for Boycott, Divestment and Sanctions (BDS) that cost Israel millions of Dollars in losses around the world,” the Committee added.

“BDS managed to expose the racist and criminal nature of this occupation, and its ongoing theft and crimes; we will continue our struggle along with millions of supporters around the world until ending this colonialist, brutal occupation.

“Signed in 1995, the Hebron Protocol only led to further expansion of illegal Israeli colonies and colonial outposts, and led to more illegal occupation of Palestinian homes and buildings, in addition to increasing the Israeli military restrictions.”