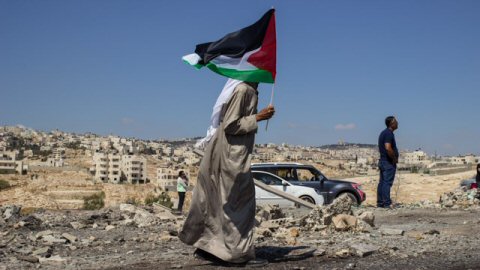 The Israeli Civil Administration ordered Palestinians from the al-Jahalin community residing in the Khillet al-Raheb area to the east of Jerusalem to demolish their homes. Should they fail to do so, the homes will be demolished by the civil administration at the families’ expense. These home demolitions are part of a broader Israeli campaign aimed at “relocating” Bedouin-Palestinian communities in the Jerusalem periphery, the so-called E1 area. Up to 2,800 Bedouins from 23 villages in the area are in danger of being forcibly evicated from their lands and transferred to a series of planned townships throughout the West Bank.

The Khillet al-Raheb homes slated for demolition have housed the community since 1997. Daoud al-Jahalin, secretary-general of the Fatah movement in the community, said that the 14 targeted houses are home to nine families. Al Jahalin said that in such a case, 50 to 70 people will be forcibly rendered homeless.

As part of the E1 settlement plans, Israeli authorities aim to relocate the the Jahalin, Kaabneh and Rashaida Bedouin-Palestinian communities from the mountains east of Jerusalem to Talet Nueima, to the north of Jericho.

Guy Inbar, a spokesman for the Civil Administration, said in April 2013 that the civil administration is working together with the Palestinian Authority toward construction of 800 doweling units in the Jordan Valley.

According to Inbar the construction plan is being drafted by a Palestinian company, which was awarded the project in a bidding process. So far no construction has commenced, but Israel continues to distribute demolition orders.

The Jahalin Bedouin community was deported from the Tal Arad region in the Negev to the West Bank in the early 1950s. After their eviction, the community lived a semi-nomadic life, moving between the Jordan Valley in winter, and the mountains to the east of Jerusalem in summer, to graze the livestock on which their livelihood depended.

After the occupation of the West Bank by Israel in 1967, the Israeli military increasingly restricted the access of the community to grazing grounds, forcing them into the vicinity of the Jerusalem‐Jericho highway. Israel now aims to deport them from this area.