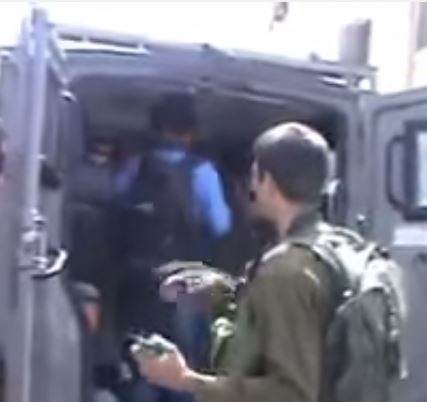 Israeli soldiers kidnapped three children on Tuesday, including a seventh-grade schoolchild, in the southern West Bank city of Hebron, after searching his bag and locating a compass that he uses in his classes. Eyewitnesses said the child, Maher Abu Rmeila, was heading to the Ibrahimiyya School, in the Old City of Hebron, when the soldiers stopped him, searched him and his school bag.

They added that the soldiers repeatedly kicked and beat the child “for carrying a sharp object,” and took him to a military post in the city, where the soldiers, and a number of Israeli extremists, attacked him again.

In related news, a number of colonialist settlers assaulted two children from the Ibrahimiyya School. When Israeli soldiers arrived at the scene, they also attacked the children, and kidnapped them.

The Palestinian Ministry of Education called on local and international legal and human rights groups to expose the ongoing Israeli violations, and crimes, and to act to provide urgent protection to the Palestinian people, especially the children.

The Ministry said Israel continues to prove its hostile nature, especially against children, who cannot enjoy a safe educational environment due to Israel’s ongoing violations and abuse.