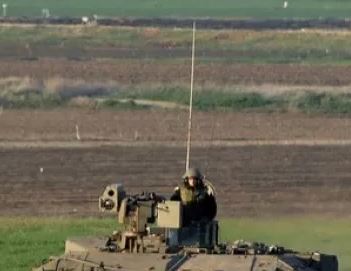 Four armored Israeli military bulldozers, and a tank, invaded on Tuesday morning, an area east of the Rafah district, in the southern part of the Gaza Strip, and headed towards areas south of Rafah. Media sources in Gaza said the Israeli vehicles came from the Sofa Israeli military base, across the border fence, east of Rafah, and advanced a few hundred meters into the territory.

The sources added that several armored vehicles were deployed close to the border fence, while military engineers conducted maintenance work on the electric fence with the coastal region.

Israeli soldiers conduct repeated limited invasions into border areas in the coastal region, uproot and bulldoze farmlands, and frequently open fire on villagers and workers to force them out of their lands.

On Wednesday morning, rounds of live ammunition on a number of Palestinian fishing boats, in territorial waters in the Sudaniyya area, northwest of Gaza City. http://www.imemc.org/article/70791