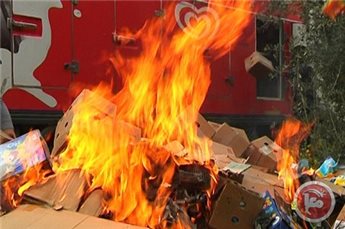 Following a recent call for a boycott of Israeli products, several residents of Nablus took things a bit further on Wednesday when they set on fire a truckload of Israeli goods headed into the city.
The Boycott call in January was the latest iteration in an international call for Boycott, Divestment and Sanctions that began in Palestine in 2005. The call to boycott applied to six Israeli companies that conduct their work in Israeli settlements built illegally on Palestinian land. They are: Tnuva, Strauss, Elite, Osem, Prigat and Jafora.

During Wednesday’s action, the protesters pulled the Israeli goods (in this case mainly ice cream) out of the truck and onto the ground, where they set fire ti the pile.

Recently in the online journal Voz is Neies, Yitzhak Gal, an expert on the Middle East economy at Tel Aviv University, was quoted as saying that he estimates the price of Israeli food exports to the West Bank at about $700 million.

Mahmoud Alloul, the Palestinian Authority minister in charge of addressing the boycott issue, had said in January ‘Activists of all Palestinian factions will be touring the territories to confiscate the products after the two-week deadline’. While no official confiscation took place, rogue elements like the group in Nablus decided to take matters into their own hands and burn the items.