Report: “Military Prosecutor Calls For Executing A Detainee From Hebron” 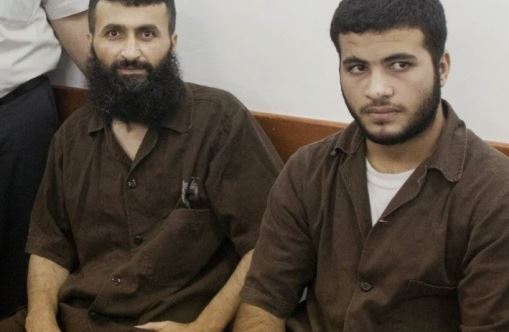 Family of detainee Ziad Hasan ‘Awwad, from Ethna town, near the southern West Bank city of Hebron, said the Israeli military prosecutor in the ‘Ofer Military Court, is demanding the capital punishment for their son, accused of killing an Israeli officer.The family said the prosecution claims ‘Awwad killed Israeli officer Baruch Mizrachi, nearly a year ago near Ethna town, the Radio Bethlehem 2000 has reported.

Awwad’s brother said the demand by the military prosecutor came just a few days after the widow of the slain officer demanded executing ‘Awwad, for “resuming his terrorist activities despite the years he spent in prison.”

‘Awwad was among over a thousand detainees who were released under the Shalit Prisoner Swap agreement, and was rearrested and imprisoned allegedly after killing the Israeli military officer.

His family said their son had nothing to do with the killing of the officer, adding that the Israeli military prosecutor is alleging ‘Awwad is behind the officer’s death, and is demanding executing him, the Aneen Al-Qaid Media Network, specialized in detainees’ affairs, has reported.

The Network’s spokesperson Montaser Nassar told the Radio Bethlehem 2000 that the prosecution’s demands of executing the detainee are “a dangerous precedent,” and demanded the Palestinian Authority to intervene.

It is worth mentioning that both ‘Awwad, and his son, have been imprisoned by Israel reportedly for being responsible for the death of the Israeli officer, and their home was demolished after the death of three Israeli settlers in Hebron, in June of 2014.

It is worth mentioning that, although capital punishment is allowed in Israel “during wartimes and for crimes against humanity, genocide, war crimes, treason,” and “crimes against the Jewish people,” only one person was executed in 1962.

His name is Adolf Eichmann; his execution by hanging came only one year after he received the death penalty for “Nazi crimes during the holocaust.” Capital punishment verdicts were issues against other prisoners, including John Denjanuk, who faced the same charges, but they won appeals the overturned their death sentences.

In 1954, Israel abolished the death penalty for all crimes, except for the crimes mentioned above.

Referring to Palestinian citizens of Israel in an elections event last Sunday, Lieberman said, “Anyone who’s with us should be given everything – up to half the kingdom.
Anyone who’s against us, there’s nothing to do – we should raise an axe and cut off his head; otherwise, we won’t survive here.”

Israeli Mako News Website said Lieberman made his statements during an interview with journalist Udi Segal during the “Electing Democracy in 2015” conference that was held in IDC Herzliya College.

In Mid-July of 2014, Israeli legislator of the Jewish Home Party, Ayelet Shaked, called for killing Palestinian mothers who give birth to what she called “little snakes.”

She said, “Palestinian mothers have to die; their houses should be demolished so that they cannot bate any more terrorists.”

Shaked added, “They are all our enemies, and their blood should be on our hands, including the mothers of dead terrorists.”

In May of 2014, Israeli Minister of Transportation Yisrael Katz called for reinstating the death penalty to apply it for Palestinian detainees; he said such a law prevents Israel “from being extorted to surrender during negotiations, and ends up releasing murderous terrorists.”