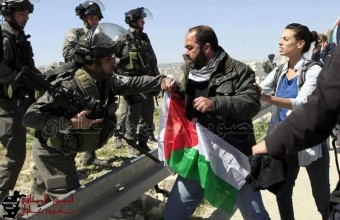 Israeli occupation forces, Tuesday afternoon, attacked a popular demonstration that surfaced around the story of the Jerusalem Gate protest camp, on the day of Israeli Knesset elections.PNN reports that hundreds of citizens and supporters, including foreigners and even Israelis, have participated in the march toward the Gate.

Israeli forces attacked demonstrators in a brutal way, detained at least seven activists, including the popular struggle activist, Yousef Sharqawi and Ahmed Odeh, both from Bethlehem, in addition to two students from Al-Quds University and two Israeli activists.

Munther Ameera, head of the higher coordination committee against the wall and settlements in the West Bank said that today’s demonstration was coordinated between the popular struggle committee and the Student Shabiba (youth)movement which follows the PLO, and the student senate of the university.

Ameera added that the Israeli detention of the activists is yet another clue to the real face of the Israeli state and its savage oppressive military, regardless of the authorities.

The village was installed for the first in February, in the Khallet ar-Raheb area, east of Abu Dis, to protest Israel’s decision to displace and relocate the Bedouin communities so that it can continue its construction and expansion of its illegal colonies.

Activists said the ‘plan to displace Bedouins is a demographic bomb that Israel is using to empty Palestinian lands of its original residents, steal their properties, and the rights to return to the original villages that they were displaced from.’