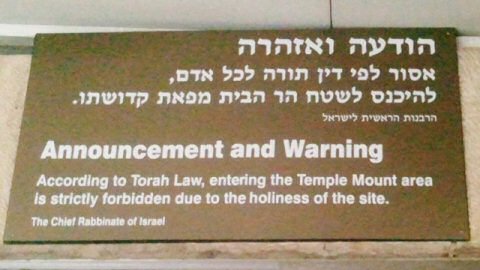 Judaism’s accepted ruling that entry to Jerusalem’s al Aqsa mosque compound – the site of the biblical temples – is prohibited to Jews is apparently softening following a concerted campaign by settler groups and so-called Temple Mount organisations.The settler-affiliated news portal Arutz 7 reports that the sign in the entrance to the al Aqsa compound has been changed to read “According to Torah law, entering the Temple Mount area by an impure person is strictly forbidden due to the holiness of the site”. Signed by Israel’s Chief Rabbinate, the sign previously noted entry was forbidden to every Jewish person, regardless of his religious state of purity.

Thus, Israel’s official rabbis have apparently, if only indirectly, provided tacit approval for the entry of Jews and Jewish Israelis into the al Aqsa mosque compound in occupied East Jerusalem.

The change was done only to the Hebrew version of the sign – the English sign remains as it was.

Yehuda Glick, head of the Temple Mount Heritage Foundation, reportedly welcomed the sign change and said that “the revolution is at its height. Today we advanced another milimeter in the process” of encouraging Jews to enter the al Aqsa mosque compound.

Clashes between Israeli police and Palestinian Muslim worshippers in the al Aqsa mosque erupted in the second half of last year, following daily invasions of the mosque compound by Israeli settlers and right-wing politicians.

In November, Israel’s leading ultra-orthodox newspaper called on Israel to ban Jews from entering Jerusalem’s al Aqsa compound, known in Israel as the Temple Mount.Yated Ne’eman, a newspaper serving the Jewish ultra-orthodox community in Israel, published a leading commentary calling on Israel to prohibit the entry of Jews into the Temple Mount area.

“The Jews who speak of ‘prayer in the holiest place for Jews’ are not referring to prayer,” the paper writes. “They are presenting their political plan as a religious wish, and use their “teachings” as an ax to grind out political achievements. This is not a struggle for the right of prayer but a type of political demonstration”.

Prominent rabbis affiliated with the settler movement sent a letter to Israel’s chief rabbis in recent months, demanding that the aforementioned sign be changed, as it has now been. Arutz 7 adds that Glick himself met recently with Chief Rabbi David Lau and the rabbi of Jerusalem to have the sign changed.