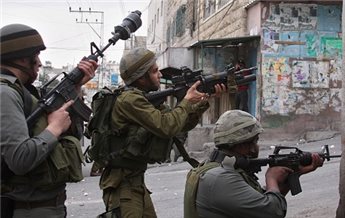 Nine Palestinians were injured Wednesday afternoon, after Israeli forces opened fire on protesters at al-Jalazun refugee camp, north of Ramallah.Israeli soldiers shot 20-year-old Palestinian Ali Mahmoud Safi in the chest with a 0.22 caliber bullet during the protest, according to Ma’an.

The bullet exited his body through the back, and the youth was reportedly in serious condition as of Wednesday evening.

Locals said three other protesters were struck by live bullets, and five by rubber-coated steel bullets.

The protest reportedly began after locals gathered in opposition to the construction of a wall between the refugee camp and the nearby ‘Jewish-only’ settlement of Beit El.

Beit El is strategically located on a hill at the northern edge of Ramallah, blocking free movement for local Palestinians to and from the city through a checkpoint. The most direct road north, meanwhile, is off-limits to Palestinians.

‘There was a riot of 50 Palestinians in Jalazun,’ she told Ma’an, adding that ‘rioters hurled rocks at the soldiers and they responded with riot dispersal means.’

‘Upon their refusal to vacate the area and refrain from further violence, they fired a .22 caliber round toward the main instigator,’ she said.

‘A hit was confirmed.’

The spokeswoman refused to comment on how the protest had begun or why the soldiers were in the area immediately beside the camp.