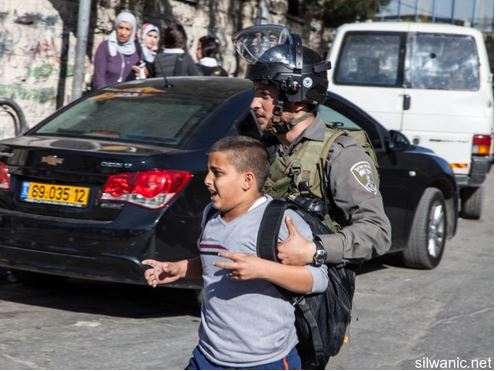 Israeli soldiers kidnapped, on Monday evening, six Palestinians in occupied East Jerusalem, including two workers from Bethlehem, while many residents have been injured.Local sources said the soldiers invaded the al-Jadira town, northwest of Jerusalem, and clashed with local youths before kidnapping four Palestinians.

The army also attacked and beat several Palestinians, who tried to prevent the soldiers from kidnapping the four Palestinians, causing a number of residents to suffer cuts and bruises.

All wounded residents have been moved to a hospital in the city for treatment.

In addition, soldiers kidnapped two Palestinian workers from the al-Khader town south of the West Bank city of Bethlehem, after the army stormed a construction site in Jerusalem.

The two have been identified as Mohammad ‘Adel ‘Issa, 22, and Mohammad Ibrahim Mousa, 22; the army said the two did not carry permits to enter and work in the city.

Earlier on Monday, soldiers kidnapped two Palestinian children in the al-‘Eesawiyya town, south of the Al-Aqsa Mosque in occupied East Jerusalem, and took them to an interrogation facility. http://www.imemc.org/article/70991

On Monday at dawn, the army invaded several communities in the West Bank, stormed and searched several homes, and kidnapped five Palestinians. http://www.imemc.org/article/70991