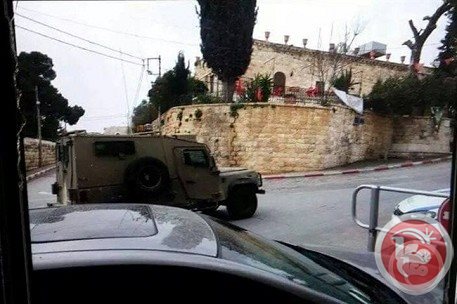 Palm Sunday celebrations in Beit Jala were brought to an abrupt end, on Sunday, when Israeli troops raided the majority-Christian town near Bethlehem and began threatening locals.Palestinian policemen on duty near the celebrations were threatened by Israeli soldiers with arrest during the raid, which took place in the middle of the day as Sunday mass was coming to an end in local churches, Ma’an News Agency reports.

The town of Beit Jala is subject to regular incursions by Israeli forces, even though the large majority of its population live in Areas A, subject to full Palestinian civil and military control under the Oslo Accords.

Palm Sunday is celebrated this year on March 29 according to the Gregorian calendar, which is recognized for religious purposes by most Western Christian denominations in Palestine. Orthodox Christians, meanwhile, use the Julian calendar and will be celebrating Palm Sunday on April 5.

The raid raises fears of a repeat of last Easter, when Israeli restrictions on Christian worship during the holiday prevented thousands of Christian Palestinians from traveling to Jerusalem and led to chaotic scenes in the city itself.

Israeli authorities have in the past come under sharp criticism for the violation of religious freedom of Palestinian Christians, who number around 200,000, including 50,000 in the West Bank, 1,000 in Gaza, and the rest inside Israel.

In March of last year, Christians from East Jerusalem issued a statement complaining that Christians are often denied access to the Church of the Holy Sepulcher during the Easter holidays.

Each Easter, checkpoints are erected ‘at the Gates and in the alley, thus preventing the worshipers from free access to the Via Dolorosa, the Church of the Holy Sepulcher, and the vicinity of the Christian Quarter.’

A report published by the US State Department in 2012 made similar observations, stating: ‘Strict closures and curfews imposed by the Israeli government negatively affected residents’ ability to practice their religion at holy sites, including the Church of the Holy Sepulchre and Al-Aqsa Mosque in Jerusalem, as well as the Church of the Nativity in Bethlehem.’

It added: ‘The separation barrier significantly impeded Bethlehem-area Christians from reaching the Church of the Holy Sepulchre in Jerusalem and made visits to Christian sites in Bethany (al-Eizariya) and Bethlehem difficult for Palestinian Christians who live on the Jerusalem side of the barrier.’

Following Easter celebrations in Jerusalem in 2013, Hanna Amireh, head of the Presidential Committee on Church Affairs, said, ‘The Israeli forces turned a religious occasion into a battle camp scenario.’